You are here: Home / Recipes / Side Dishes / Potato Gratin
123 shares 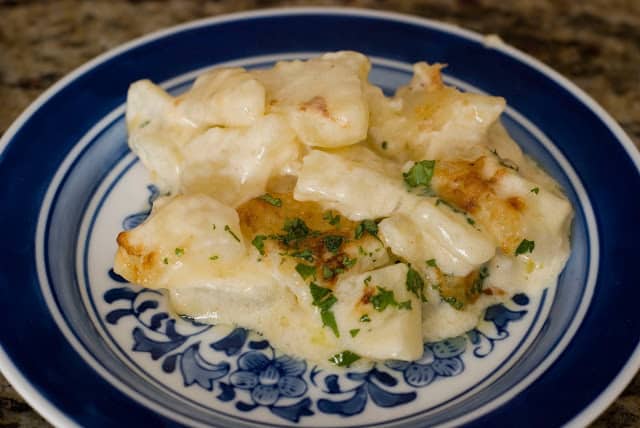 You will notice that this Potato Gratin recipe has fewer ingredients than the Potato Casserole and I think it takes less time to prepare.  I generally have all the ingredients on hand.  It’s a recipe that I can make last minute without having to have purchased special ingredients for the recipe. 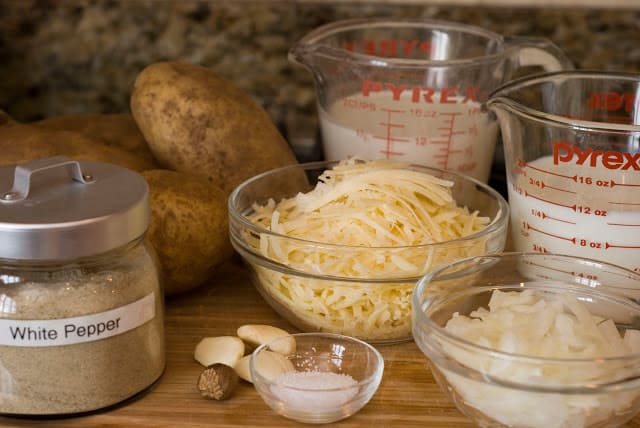 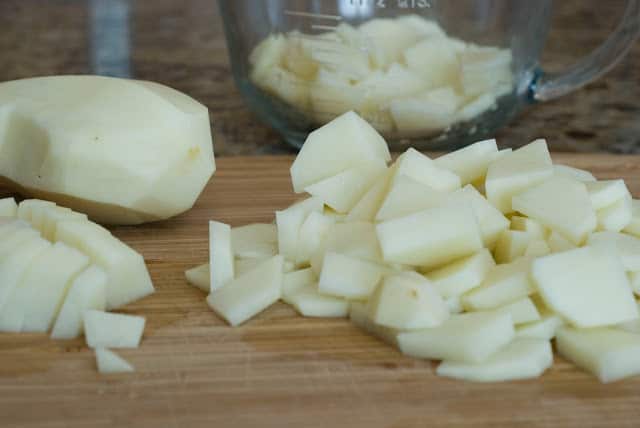 Peel and cut potatoes.  Not too small or they’ll turn mushy. 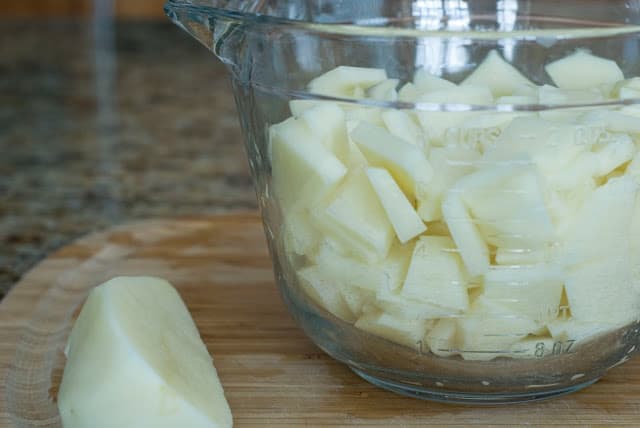 You will need about 8 cups of chopped potatoes. 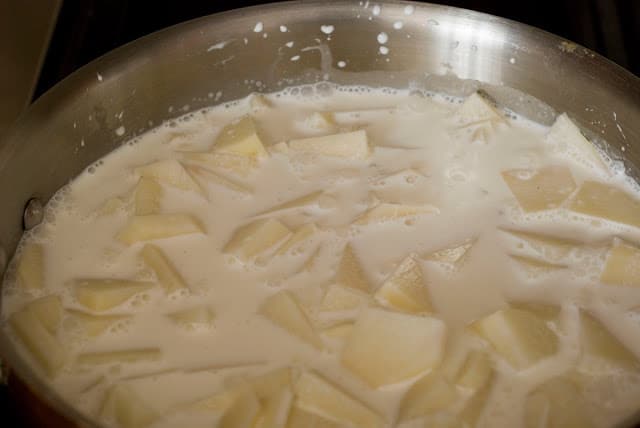 Put potatoes, milk and cream in a large pot. 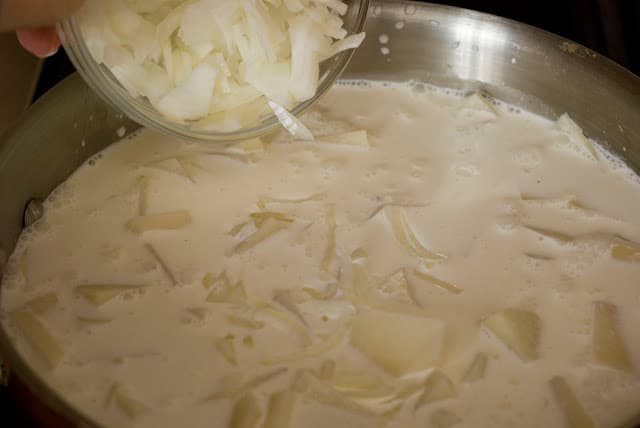 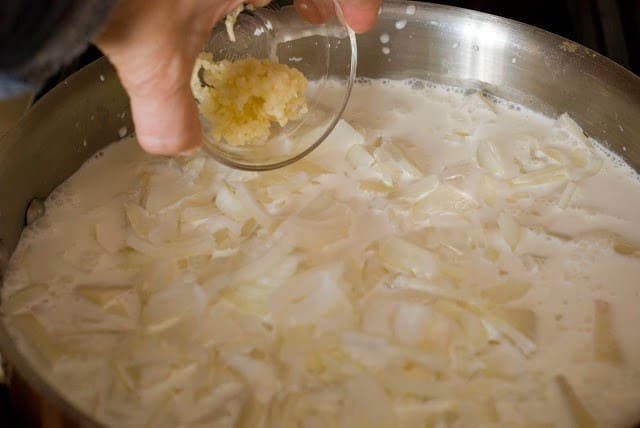 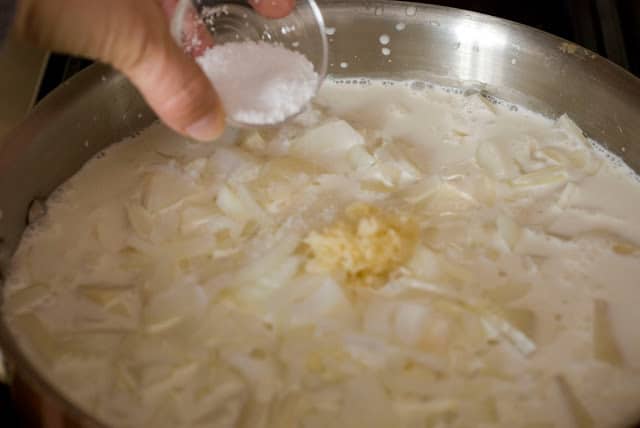 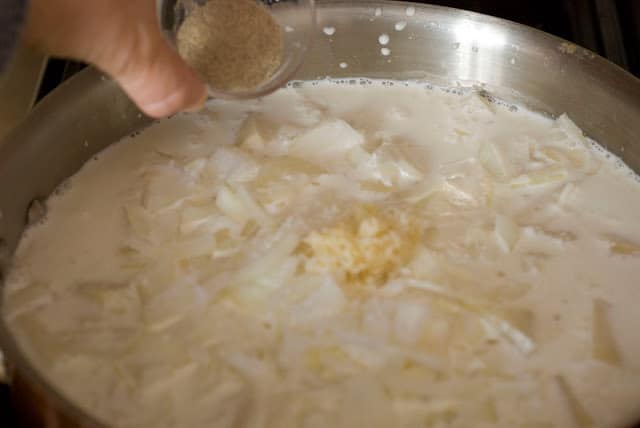 …and the white pepper. 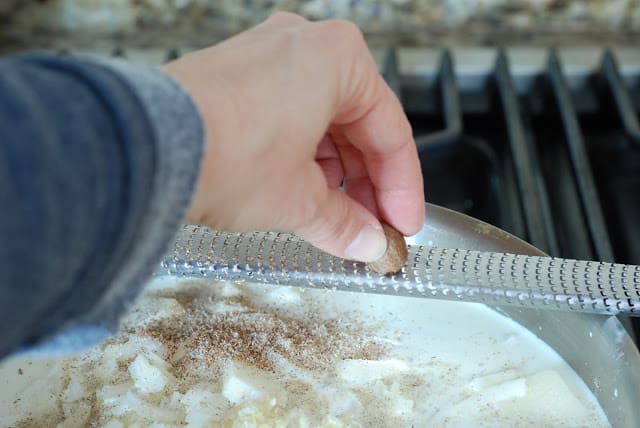 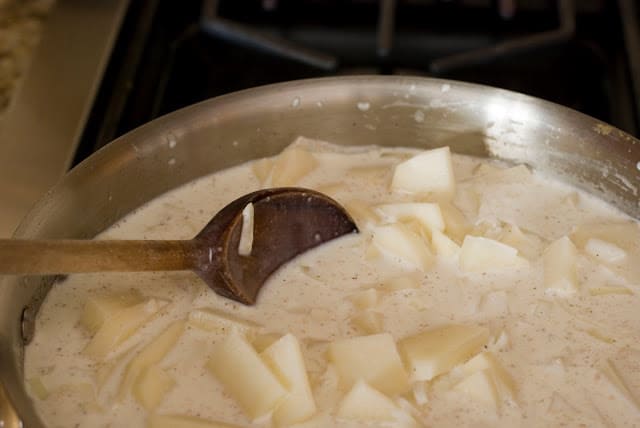 Bring all of the ingredients to a simmer over medium heat. 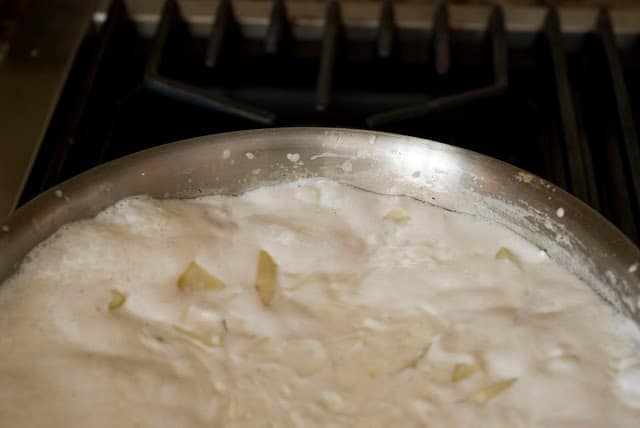 Bring to a rolling simmer, stirring every now and then so the potatoes don’t stick to the bottom of the pan because they will. 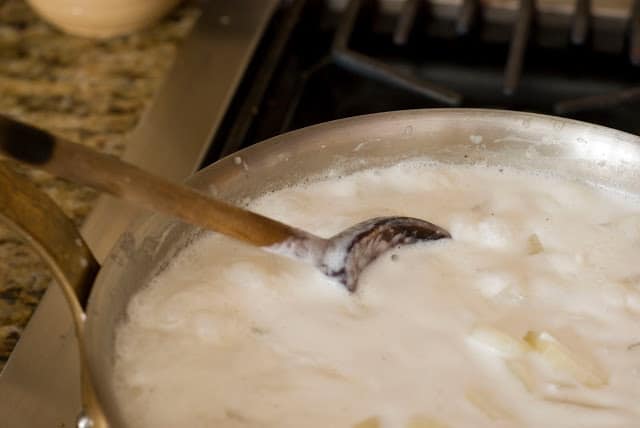 Simmer for 15 minutes.  The starch in the potatoes will start to thicken the sauce.  Remove from heat. 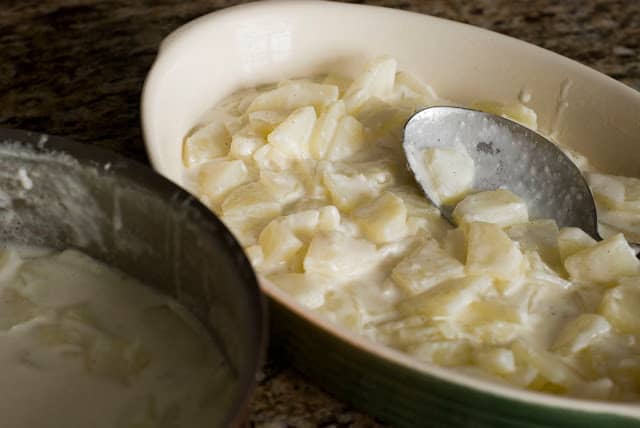 Spread half of the potatoe mixture in a buttered baking dish.   Baking dish:  Emile Henry from France.  LOVE it! 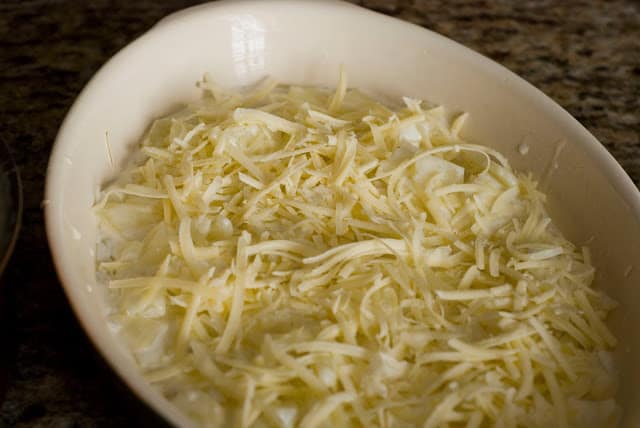 Sprinkle half of the Gruyere cheese over the potatoes. 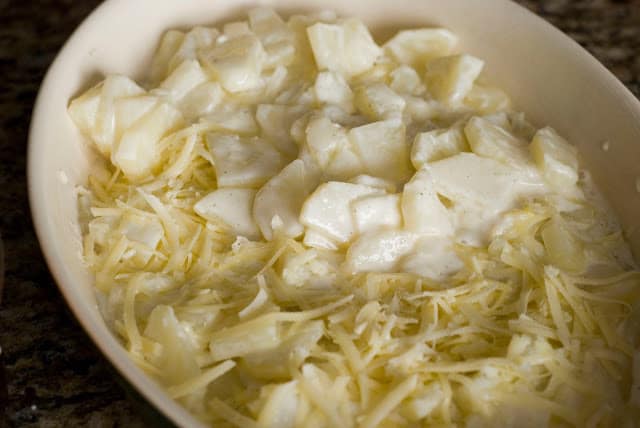 Spoon the remaining potato mixture over the cheese layer. 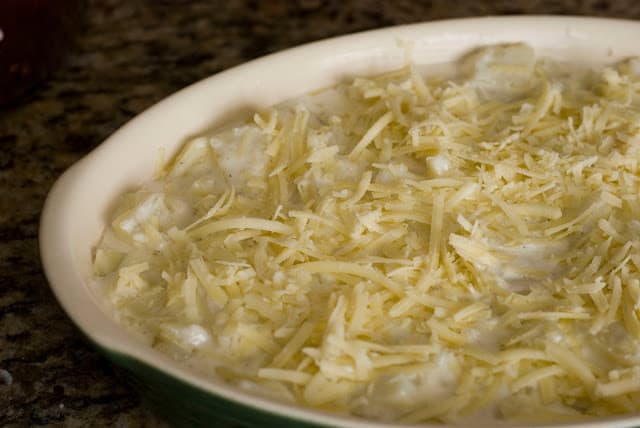 Sprinkle remaining cheese mixture on top.  Place gratin in a 400 degree preheated oven and bake for about 30 minutes or until the potatoes are bubbling and the cheese has started to brown. 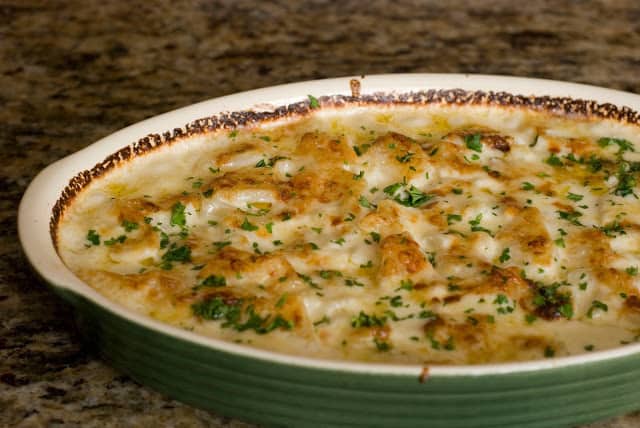 I like to sprinkle the gratin with a bit of fresh parsely that has been chopped.  I really like to garnish with fresh herbs.  Besides brightening up a dish, it adds a fresh flavor. 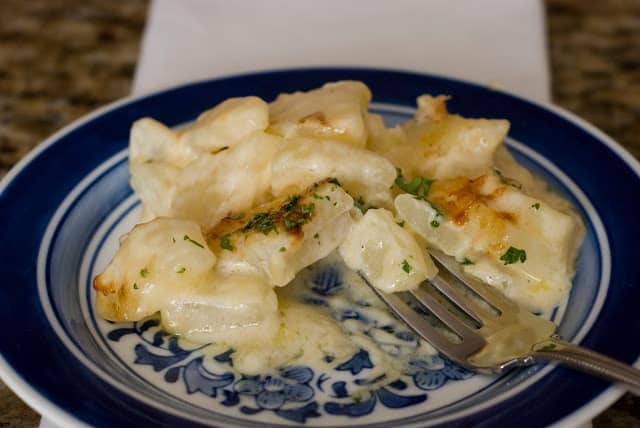 Potato Gratin.  I served this with pan seared halibut and a salad made of fresh spring greens.  It was one delicious meal. 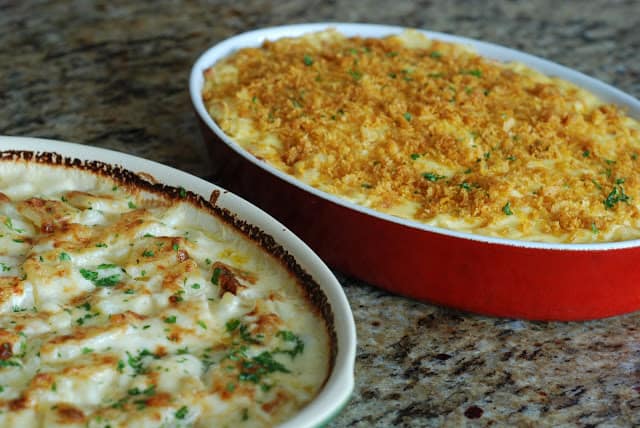 And the winner of my potato throwdown is…?       The french potato gratin.  Hands down.  Was there any question in your mind which one I’d like the most?  Please.  Because I knew that I would be bias, I brought in two hungry young single adult males to taste my potato dishes.  First they tried the “funeral potatoes” and agreed that they were pretty good.  Brandon said, “wow, these are good and I’ve had some pretty raunchy funeral potatoes”.
Then, the two polished off half of the potato gratin.  No kidding.  Ryan admitted that there was “no contest” between the two.  Potatoes simmered in cream and Gruyere?  How can you go wrong?
I’m anxious to hear your response.  Try the potato throwdown.  Go ahead bash me for my beliefs on funeral potatoes.  I’ve been pursecuted for my beliefs on food before.  It won’t be a first.
Potato Gratin
8 cups russet potatoes, peeled and cut into chunks
1 1/2 cups whole milk
1 1/2 cups heavy cream
1/2 cup onion, sliced
1 tablespoon garlic, chopped
2 teaspoons kosher salt
1/4 teaspoon white pepper
1/4 teaspoon fresh grated nutmeg
1 cup Gruyere cheese (can use Swiss cheese)
Preheat oven to 400 degrees.  Butter a 4-quart baking dish and set aside.  Bring potatoes, milk, cream, onion, garlic, salt, white pepper and nutmeg to a simmer.  Simmer on medium-low for 15 minutes.
Layer half of the potatoes in the bottom of prepared baking dish.  Sprinkle with half of the cheese.  Repeat with remaining potatoes and cream/milk sauce.  Sprinkle with remaining cheese.  Bake, uncovered, for 30 minutes or until the potatoes are cooked through and the cheese is beginning to brown.  Remove from oven and sprinkle with fresh chopped parley, if desired.
Print recipe