You are here: Home / Recipes / Side Dishes / Potato Casserole aka Funeral Potatoes
1270 shares 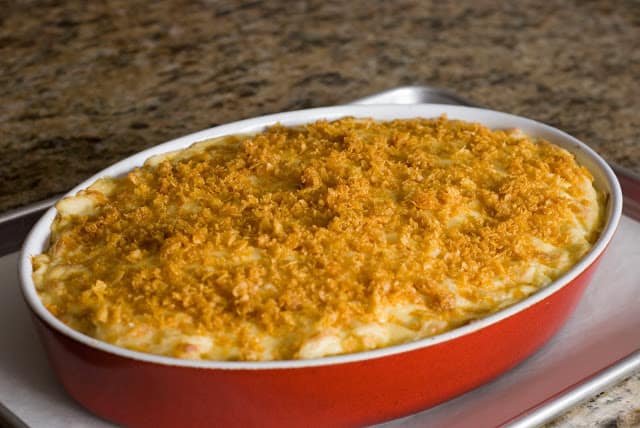 If you insist on making Funeral Potatoes, then you need a good recipe. I think that my Aunt Stella’s recipe is probably the best I have tasted. You will notice that NO frozen hashbrowns are present in the casserole. She boils, peels and shreds red potatoes. This makes such a huge difference in the outcome of your dish. Something else that will make your funeral potatoes taste better is using cream of chicken soup opposed to cream of mushroom soup (vile). I promise you your casserole will taste better and the color will be more appealing.

The most recent funeral I attended served a potato casserole in which the frozen shredded hashbrowns were still frozen. Not a good taste. At my Grandmother’s funeral my potato casserole had “rotten” cheese used to prepare it. The smell was worse than the taste. With that in mind, remember to use a good quality sharp cheddar cheese. A good quality cheese will melt nicely without curdling.   With that said, let’s make funeral potatoe.

The ingredients for potato casserole.  Notice the “real” potatoes.  No boxed frozen shreds in my casserole. 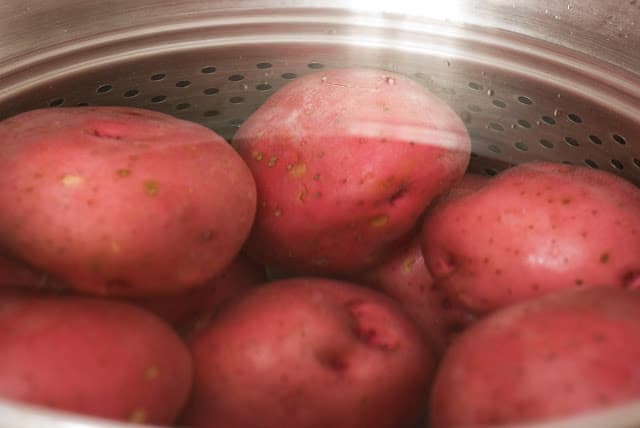 First you want to boil or steam the red potatoes. 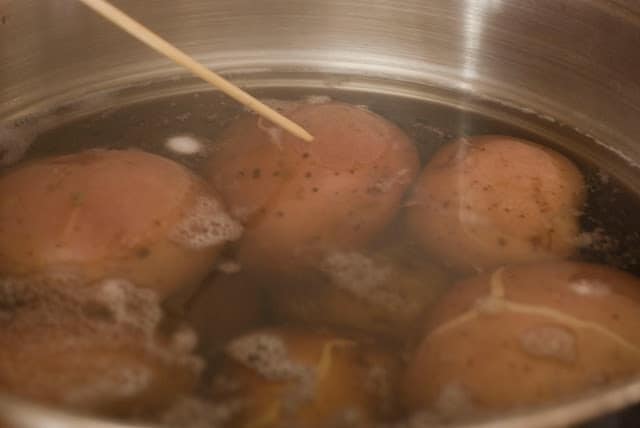 I like to use a scewer to test the potatoes.  When the potatoes are not longer hard, but soft.  Remove from the heat. 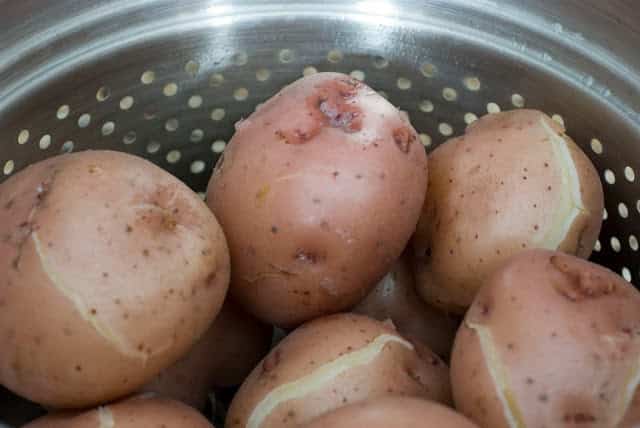 Drain off the water and allow to cool completely before peeling.  If you don’t let them cool, you will burn your fingers. 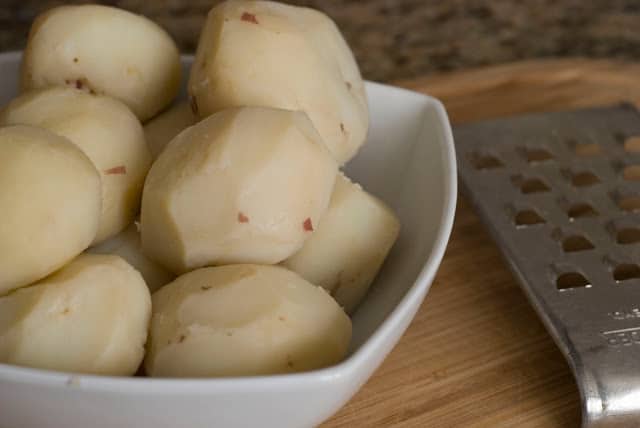 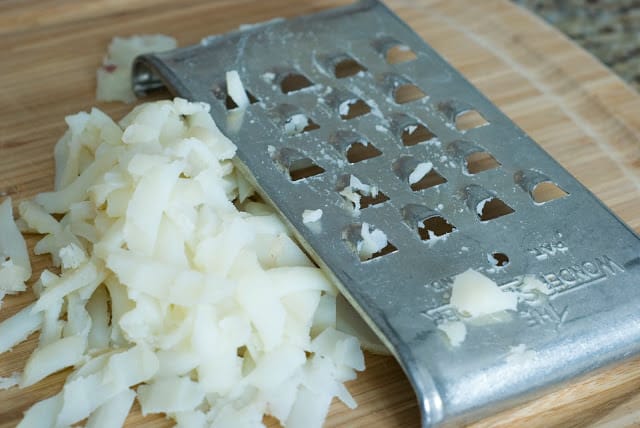 Grate the cooled potatoes.  Look at that awesome grater.  It is just like the grater that my Grandmother used to use.  It has very large grates.  It’s awesome.  I found it in an antique store for about $5.  What a find. 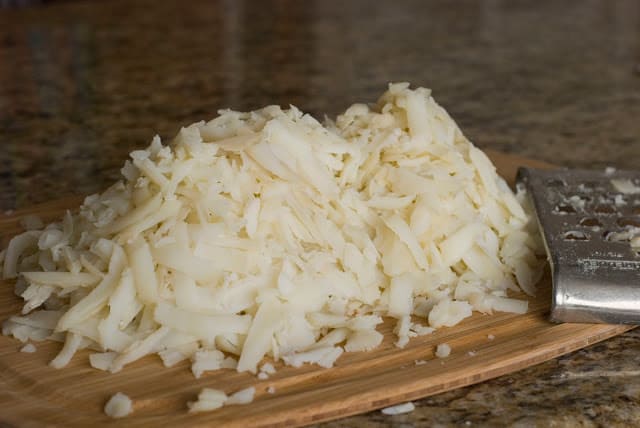 That is one huge pile of spuds. 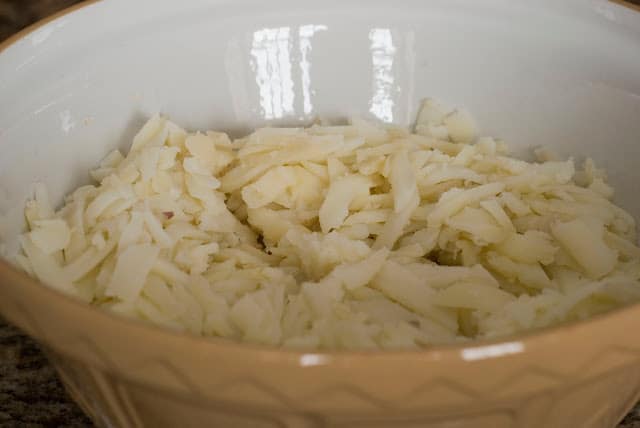 Place the grated potatoes in a HUGE bowl. 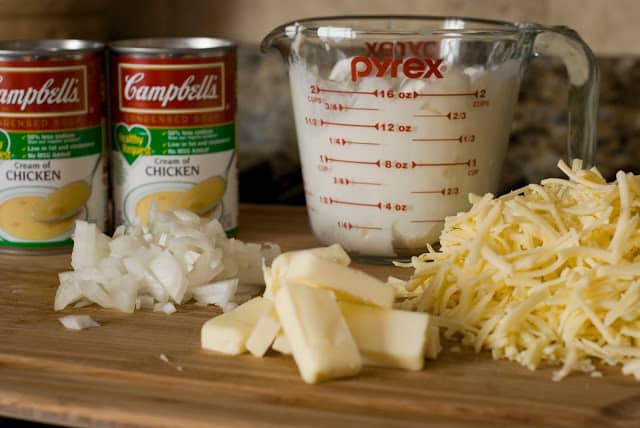 Here are the players for the sauce.  I forgot to picture the 2 teaspoons of kosher salt.  DO NOT forget the salt. 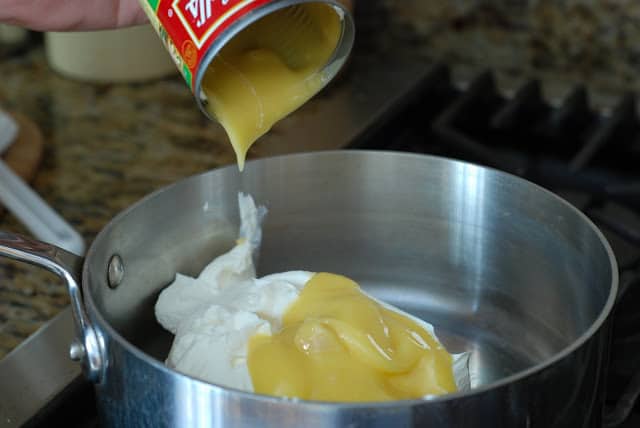 In a medium size saucepan, add the sour cream and cream of chicken soup…glop. 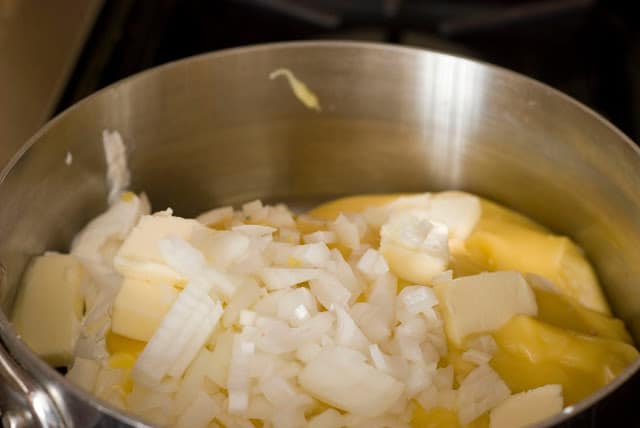 Add the butter, onions and salt. 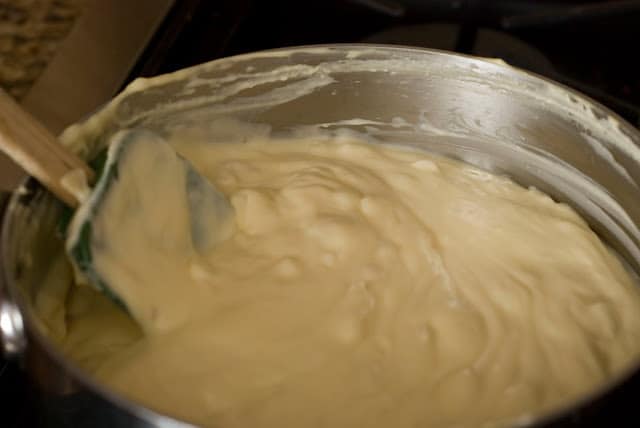 Stir the mixture until you have a nice creamy…um…glop.  Bring to a simmer. 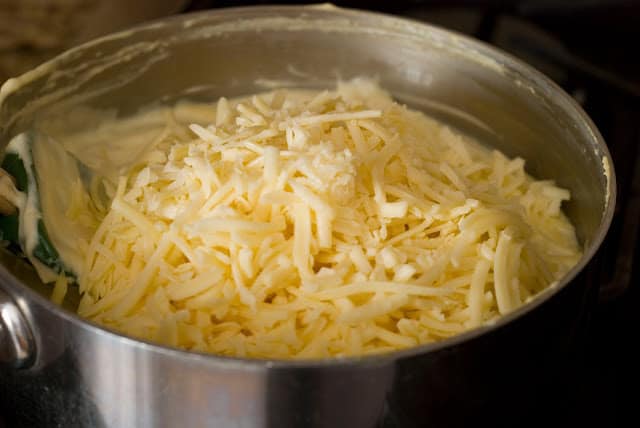 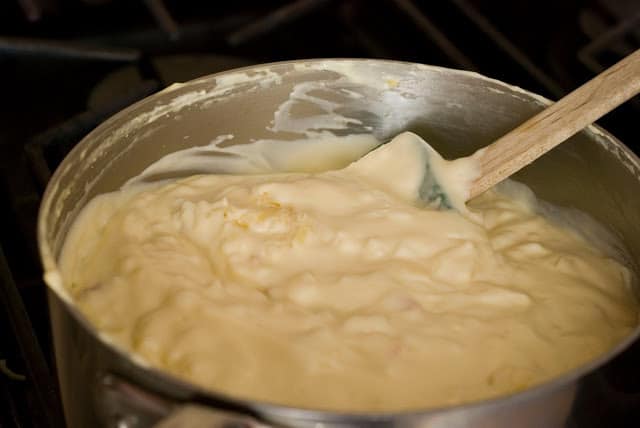 Stir the mixture together.  Remember the cheese does not have to melt all the way. 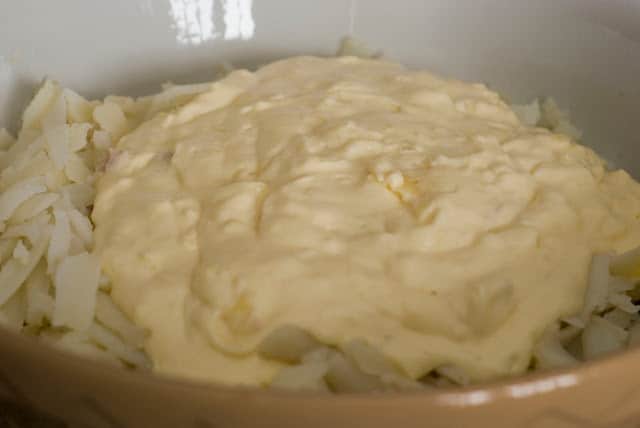 Stir 2/3 of the glop over the shredded potatoes and gently stir the two together.  You don’t want to be rough with this because the potatoes will break up and I don’t think you want that to happen. 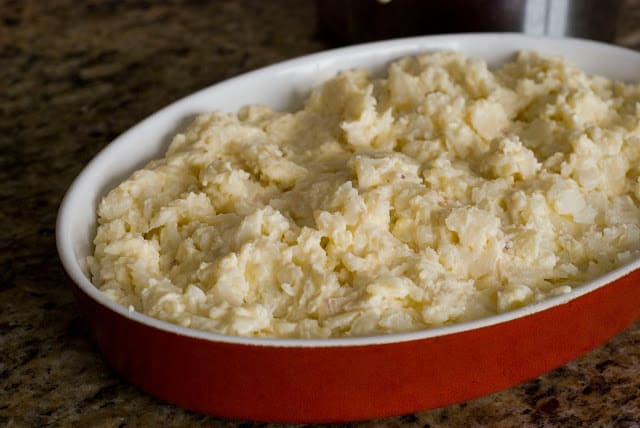 Spread the potato mixture in a large buttered baking dish.  Check out this dish.  It’s Emile Henry.  It’s made in France.  Awesome bakeware.
Story:  I went to France to visit my daughter, who was going to school in Paris.  We went into a cooking store and found a HUGE Emily Henry baking dish.  Larger than this red one.  It was beautiful and the cost, believe it or not, was just as beautiful so I bought it.  When my husband saw that I had purchased this huge dish, he informed me that it wouldn’t fit in my suitcase and that he was NOT going to carry it around for me.  I informed him that I had NEVER asked him to carry it.  I lugged that gorgeous dish on a train and through the subway system and then onto an airplane.  I still have it and it was worth every heavy step.  Some day I’ll let you see it. 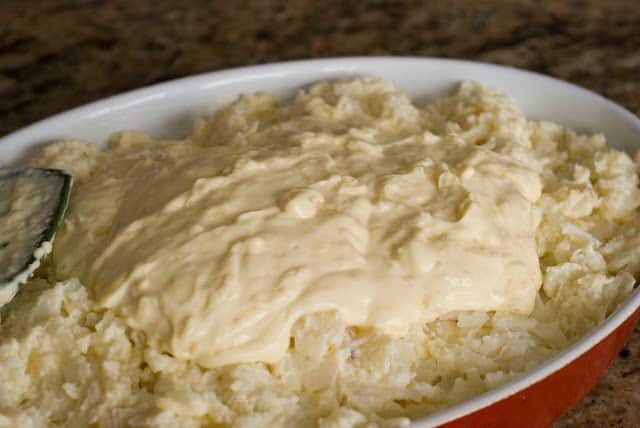 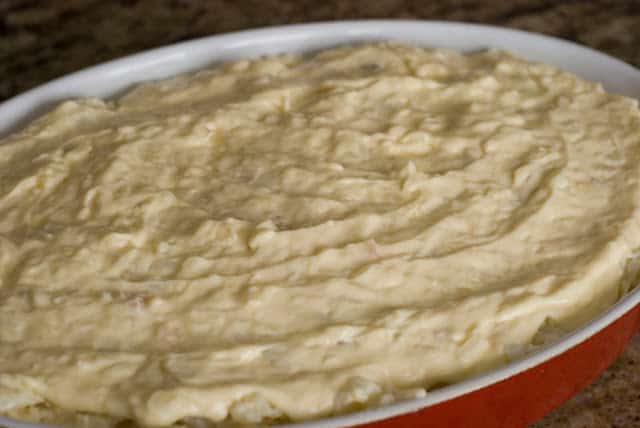 Smooth over the potatoes. 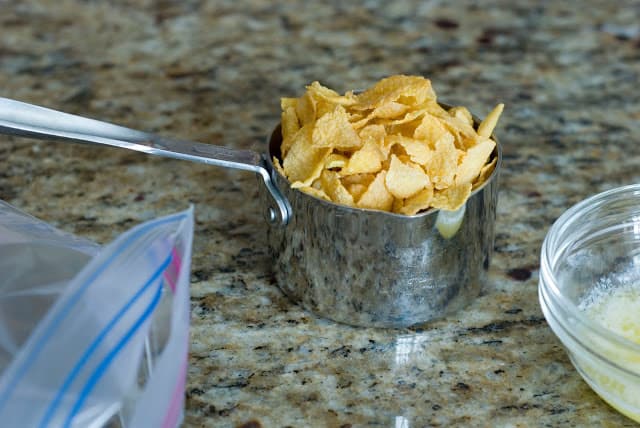 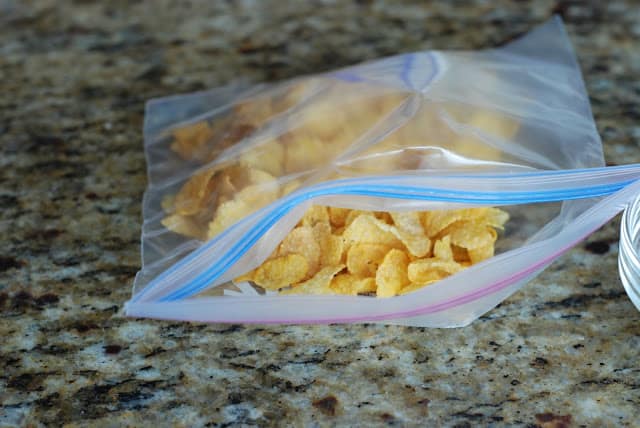 Put the cornflakes in a ziplock bag. 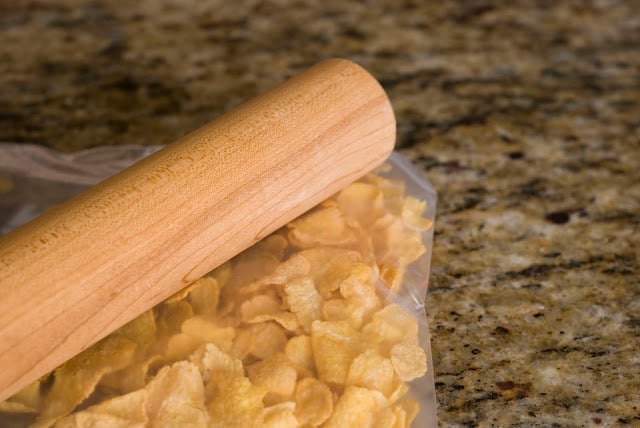 Take a rolling pin and crush them. 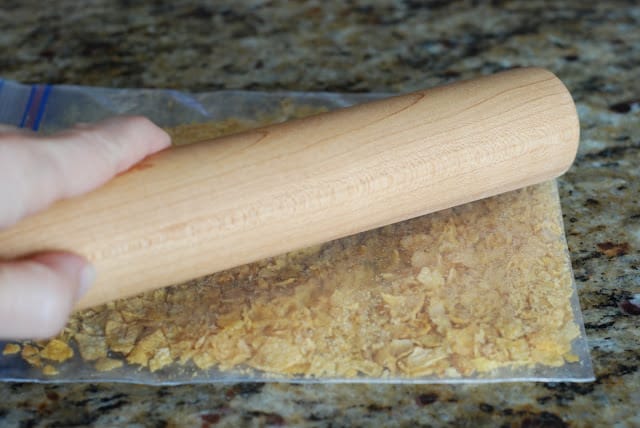 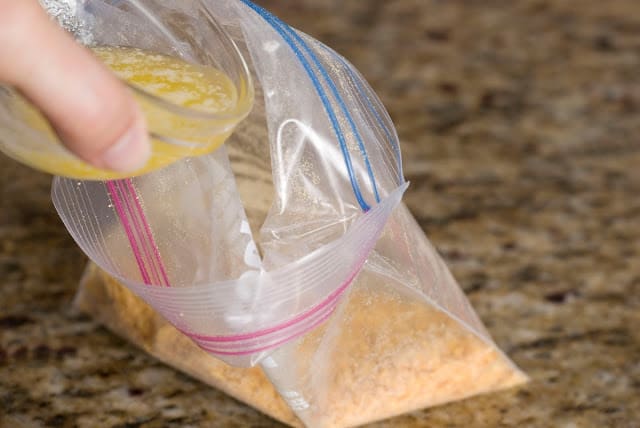 Pour the melted butter into the bag of crushed cornflakes. 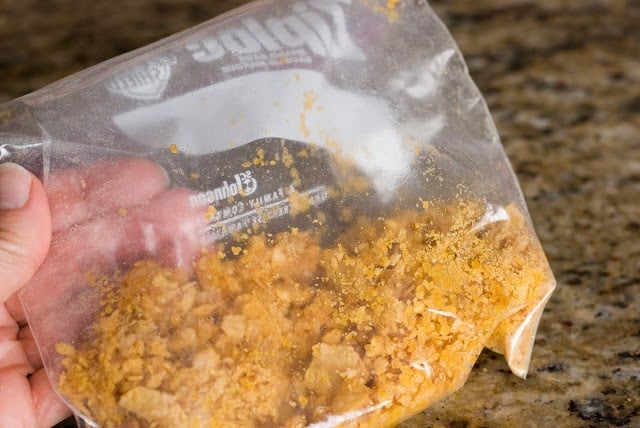 Shake the bag to mix the butter and cornflakes together. 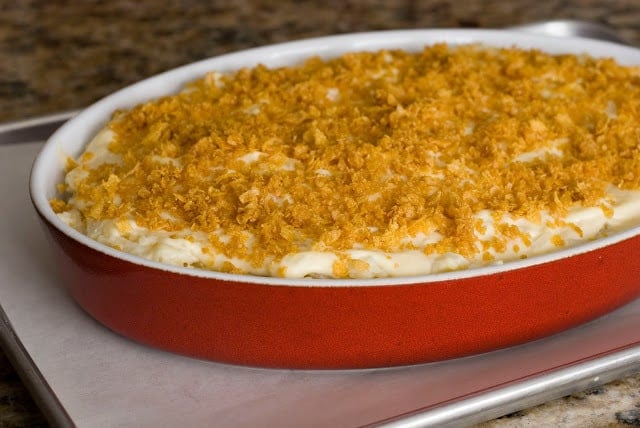 Sprinkle over top of the potato mixture.  Place in a preheated 350 degree oven and bake for 45-50 minutes or until the potatoes are bubbling.  I like to put the baking dish on a cookie sheet lined with parchment paper.  Just in case it bubbles over.  This way my nice clean oven doesn’t get messy. 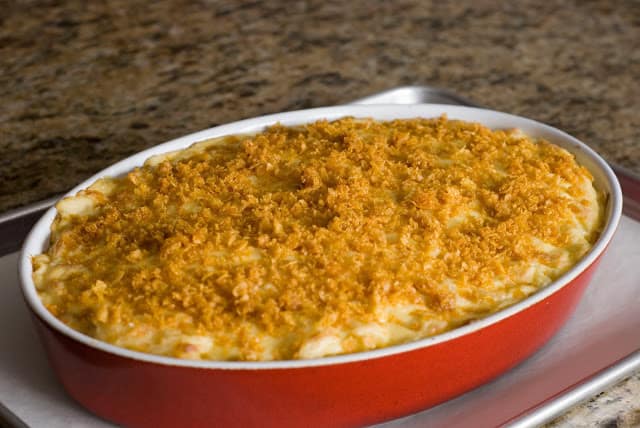 Remove from the oven and cool 10 minutes before serving. 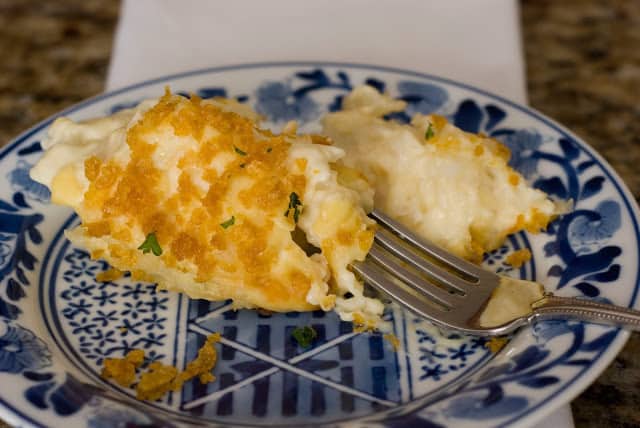 Wash, boil, cool, peel then shred the potatoes. Set aside. In a medium-saucepan mix and heat the butter, soup, sour cream, onion and salt. Cook until butter is melted and sauce in smooth. Remove from the heat and stir in the cheese. The cheese does not have to be completely melted. Stir 2/3 of the mixture into the shredded potatoes. Pour into a greased 9 x 13-inch baking dish. Spread with remaining sauce. Sprinkle with corn flake topping. Bake at 350 degrees for 40 minutes uncovered.