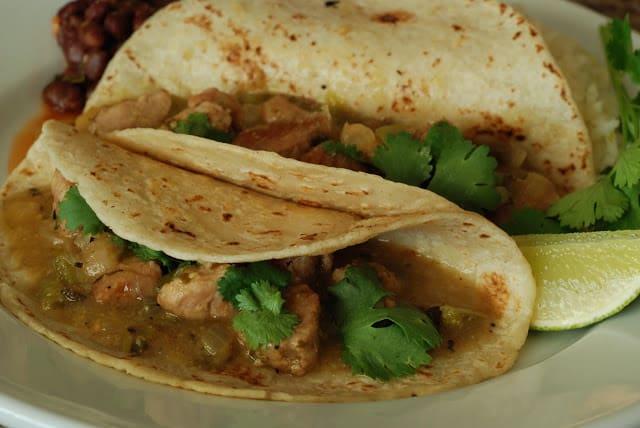 Here we go.  Part 2 of the great Pork Chile Verde.

If you have pre-chopped all of your ingredients and refrigerated them over night, the rest is a piece of cake.

First you will need the cut pork tenderoin. 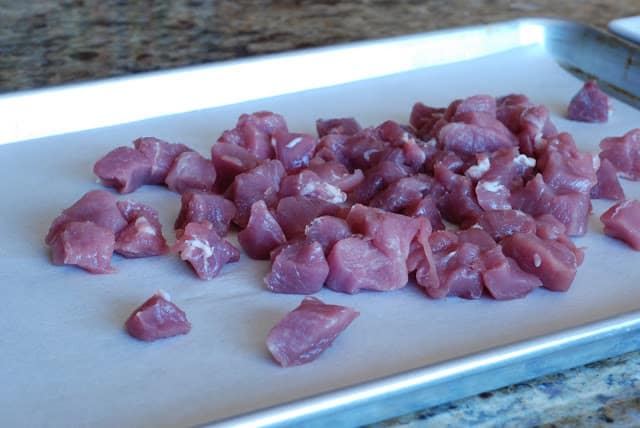 I like to line a baking sheet with parchment paper.  Put a small portion of the pork on the baking sheet. 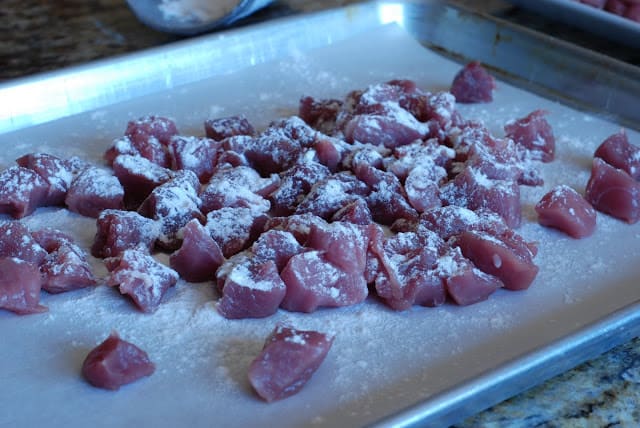 Lightly dust the pork with a little flour. 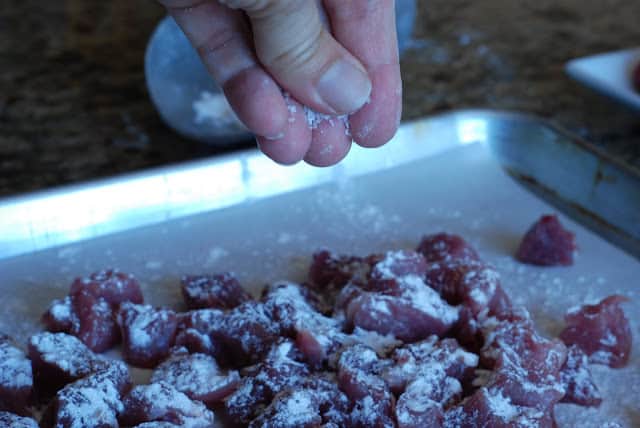 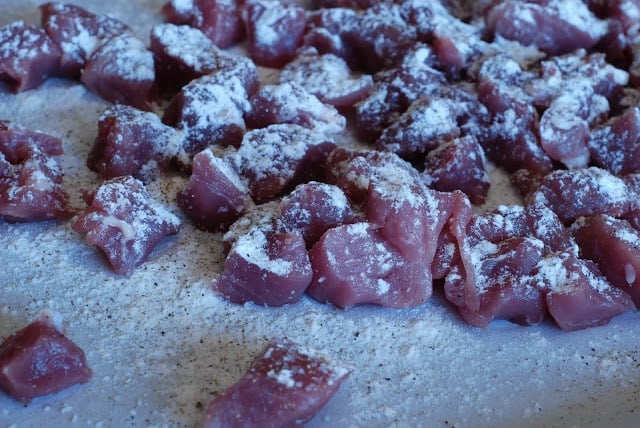 Sprinkle with a few grinds of fresh pepper.  Toss the pork until it is coated with the flour, salt and pepper. 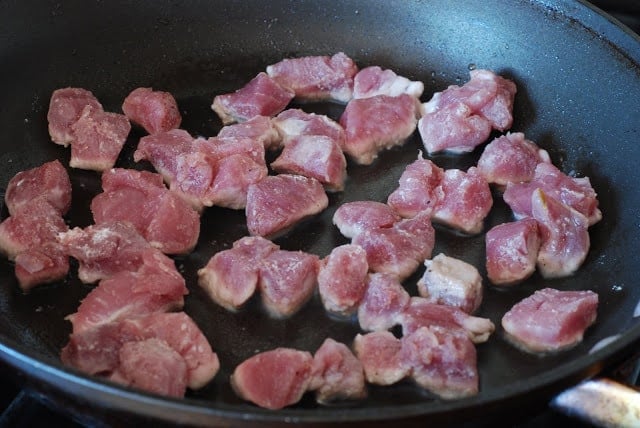 Place a large skillet over medium heat and drizzle with about 2 tablespoons of oil.  Put a layer of pork in the skillet to sear.  Do not over crowd the pan or the pork will just steam.  We want a nice crisp brown outer layer on the pork. 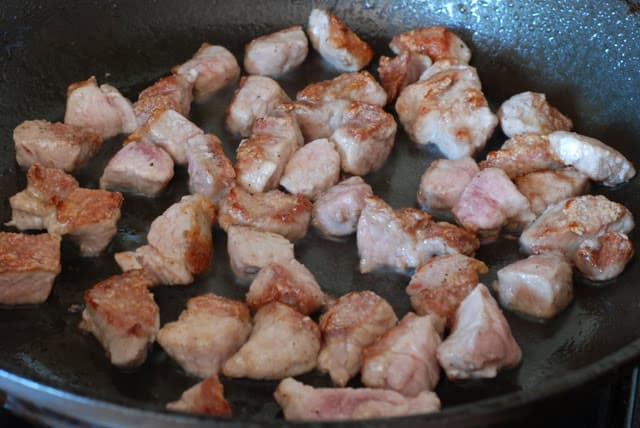 After browning one side, turn the pork over and cook until it is well browned on all sides.  The browning of the meat = flavor.  Flavor is good.

Transfer the cooked pork into a crockpot or large pot to continue cooking.

Repeat this process with the remaining pork.  I generally cook the pork in 5 or 6 batches to insure that the meat browns nicely. 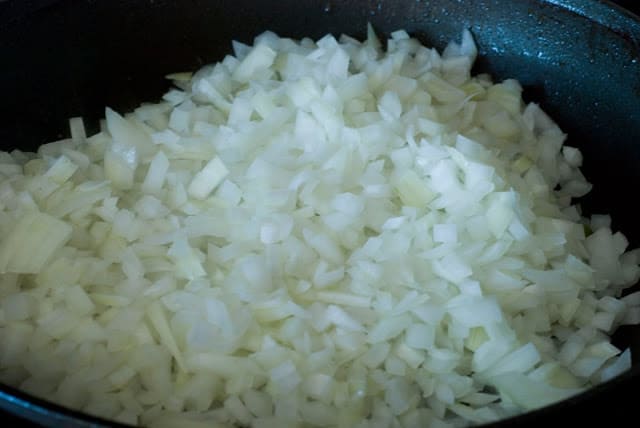 Do not clean out the skillet.  Add the chopped onions to the hot skillet. 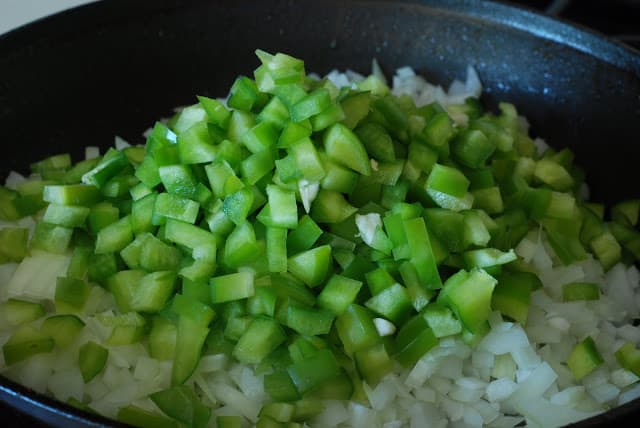 Saute for about 5 minutes or until the onions and pepper begin to wilt. 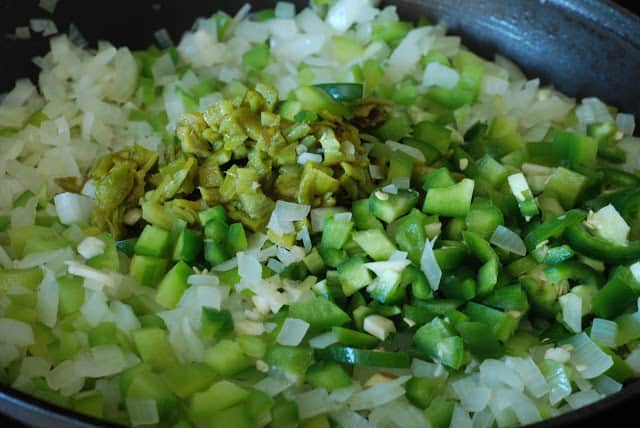 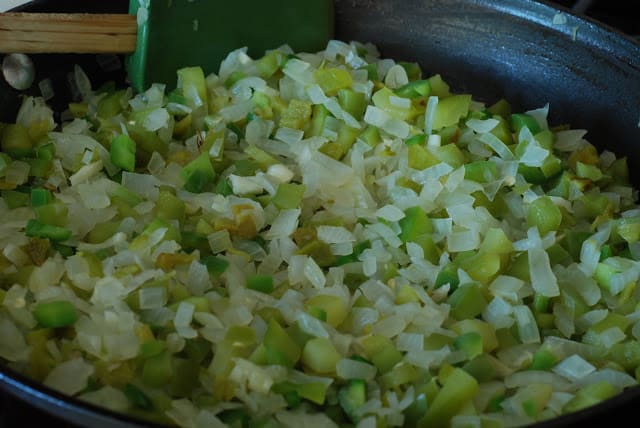 Cook for an additonal 3- 4 minutes. 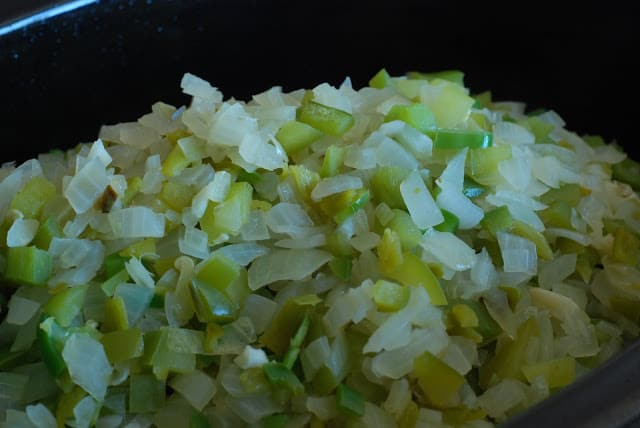 Transfer the cooked onions, peppers and garlic to the same pot that the pork is in. 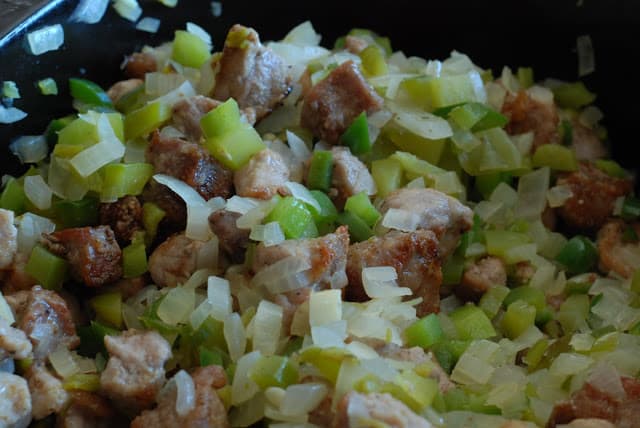 Stir the pork and cooked onions and peppers together. 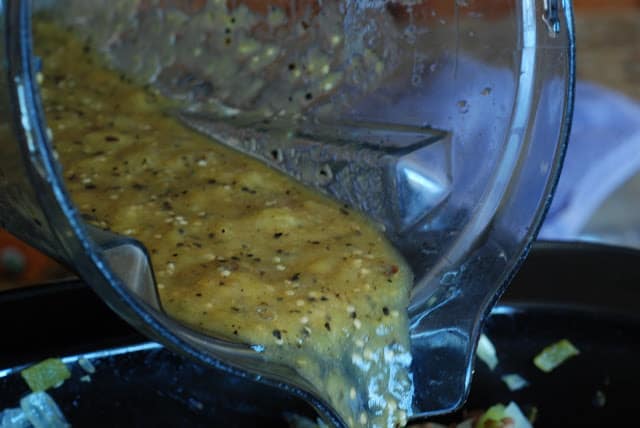 Remember the tomatillos that we pureed yesterday?

Pour the pureed mixture into the meat/onion mixture. 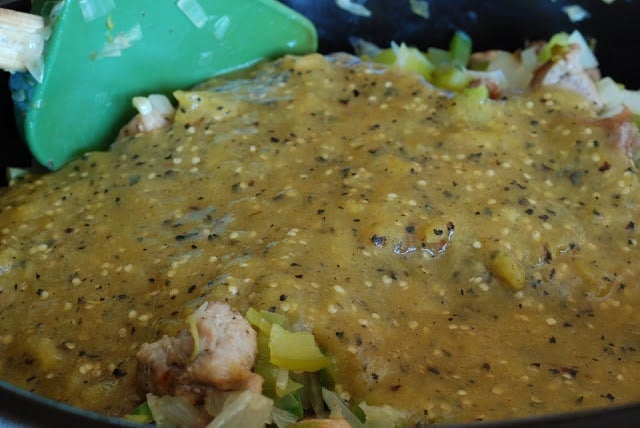 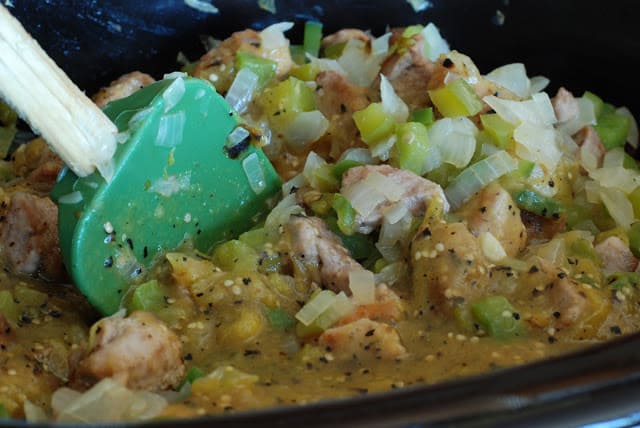 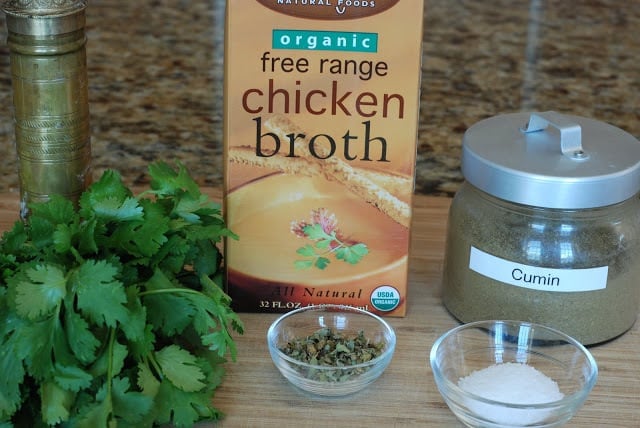 The next set of ingredients: 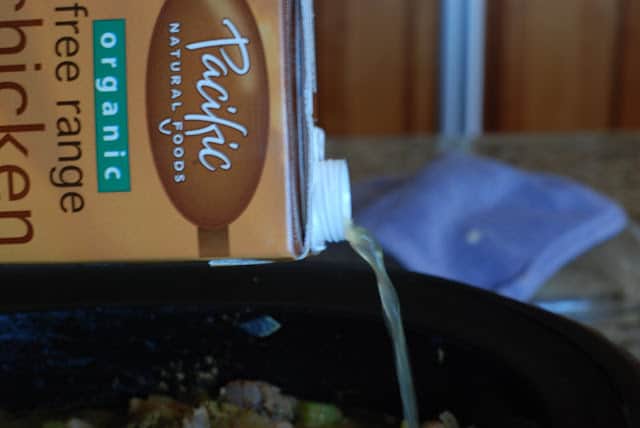 Pour the 4 cups of chicken broth over the meat mixture. 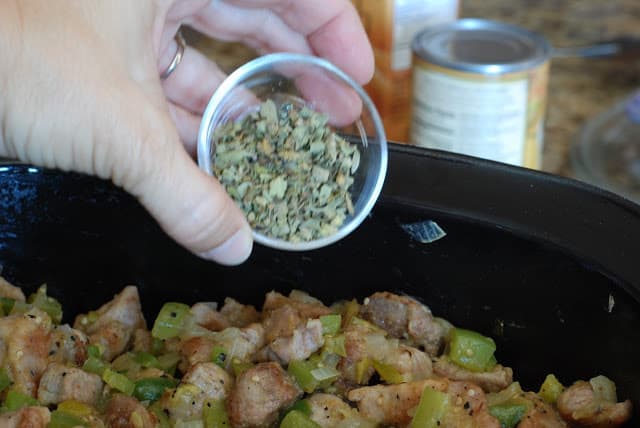 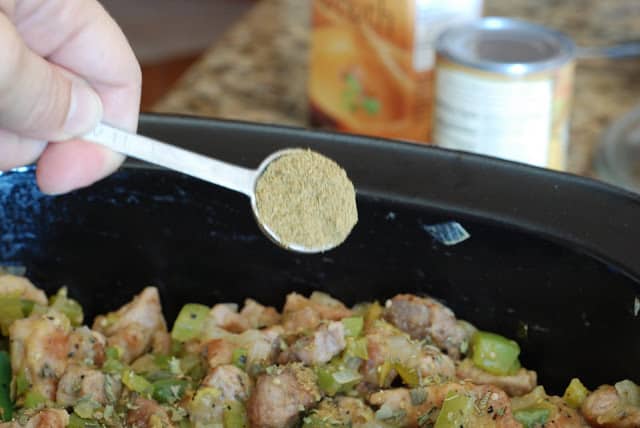 Sprinkle in the cumin. 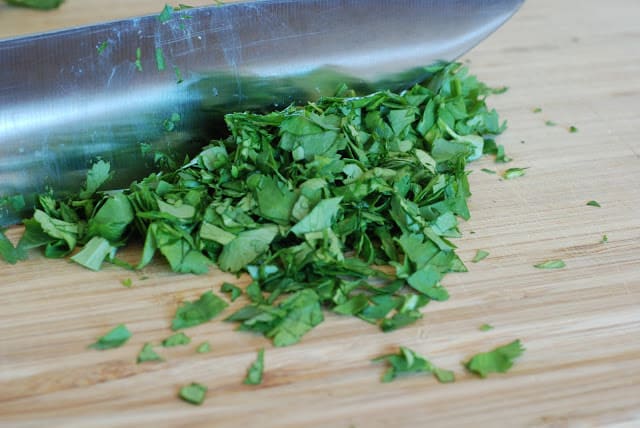 Chop one bunch of cilantro leaves.

Toss the cilantro in. 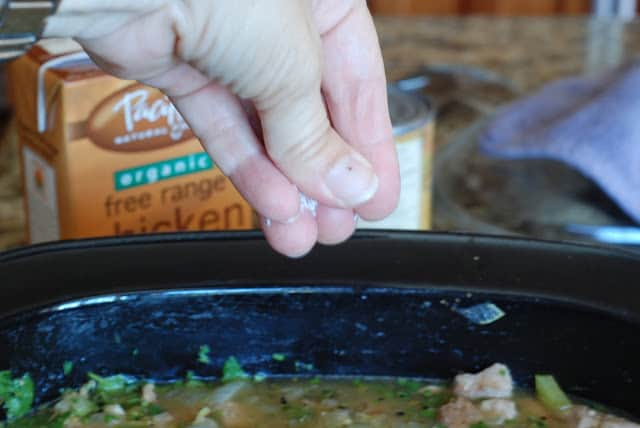 Taste the mixture to see if you need to add additonal salt and pepper. 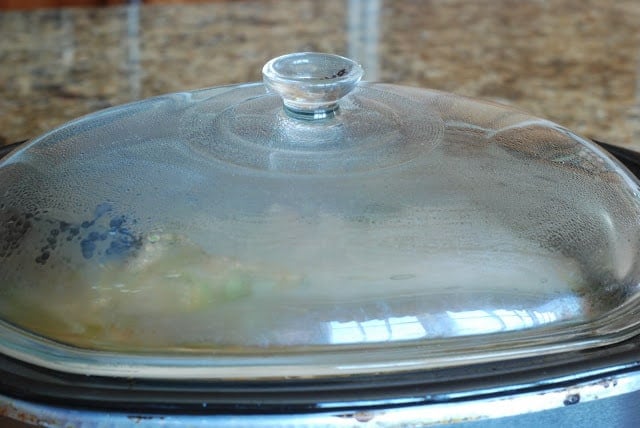 If you are using a crockpot, put the lid on and simmer for 4 hours.

If you are using a big soup pot, simmer on low heat on the stovetop for 2-3 hours uncovered. 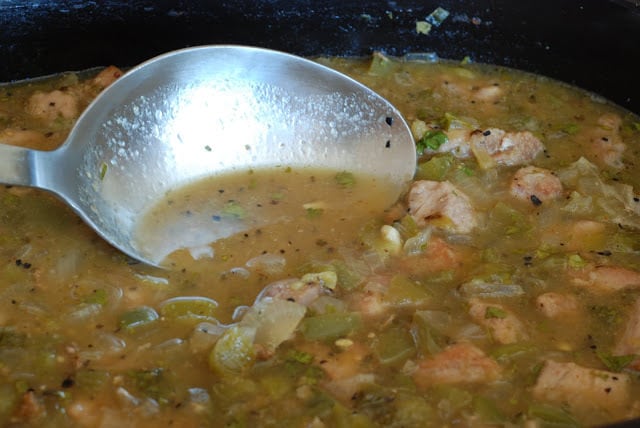 You have probably noticed how wonderful the kitchen smells by now.  I like to check the broth consistancy after the Chile Verde has been cooking for about 3 hours.  If it looks quite thin, I like to sprinkle in about 2 tablespoons of cornmeal. 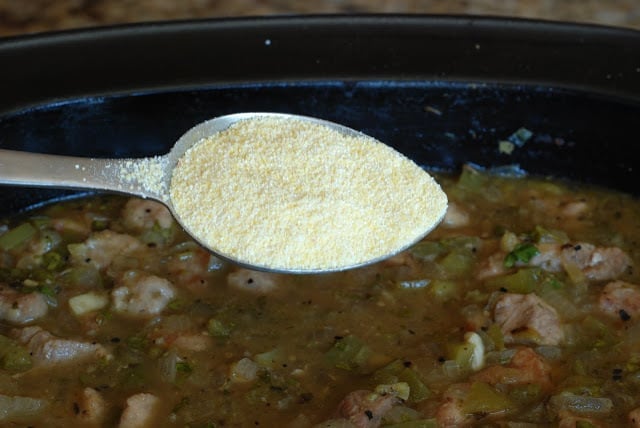 This is completely optional.  We like to eat Chile Verde in corn tortilla’s.  If the sauce is too thin, it makes it very difficult to eat.  So I like to thicken the sauce up a bit. 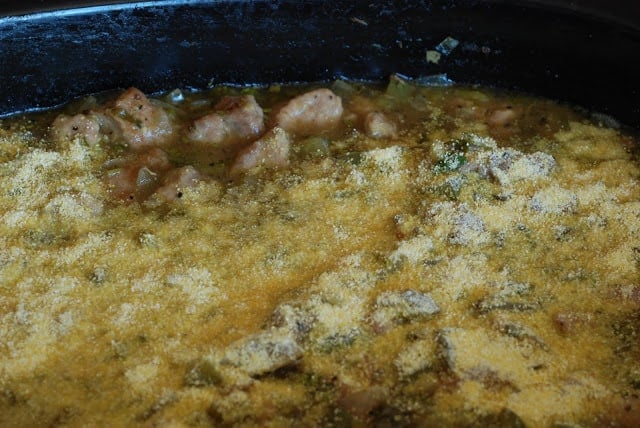 Just sprinkle on top and stir the cornmeal in.  Continue to cook for another hour or so.

Your home now has a wonderful chile aroma.  Actually your neighborhood probably has a nice aroma by now.  Ahh the smell just permeates the home. 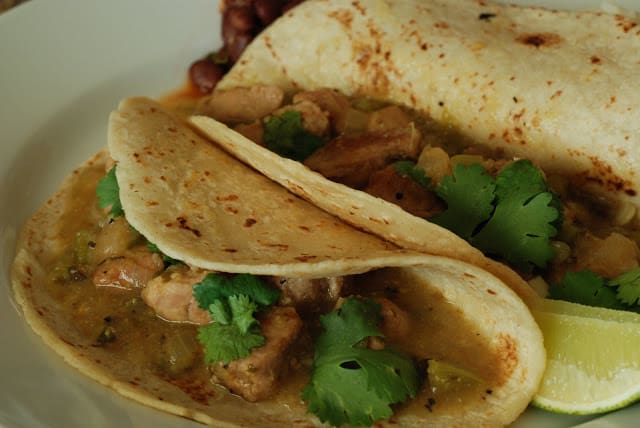 We like to serve Pork Chile Verde in steamed corn tortillas with a squirt of lime and cilantro.  It is fabulous over tomales or you can just eat a big bowl full.

Season the pork meat generously with salt and pepper, lightly flour. Heat in a heavy-bottomed skillet over medium high heat and brown pork chunks well in small batches on all sides. Lift pork out of pan and place in a wide soup pot or crock pot. Discard any fat and place the onions and peppers in the same skillet and sweat over medium heat, stirring occasionally until limp, about 5 minutes. Add all of the chiles and cook and additional 3-4 minutes, then add the garlic and cook 1-2 minutes more.

Add the sauteed vegetables, pureed tomatillos, oregano, cumin, cilantro and chicken stock to the cooked pork. Stir to combine and taste for additional salt and pepper. Simmer in a crock pot for about 4 hours. If using a soup pot, simmer uncovered for 2-3 hours.

Optional: If the juices seem thin during the last hour of cooking, just sprinkle 2 tablespoons of corn meal over the top and stir in.

A great way to hone your knife skills.