You are here: Home / Recipes / Beverages / Lavender Punch
549 shares
Jump to Recipe Print Recipe
This refreshing beverage, Lavender punch, is spiced with a bit of cinnamon, cloves, and lavender.  Mixed with grape juice, limeade, and gingerale. 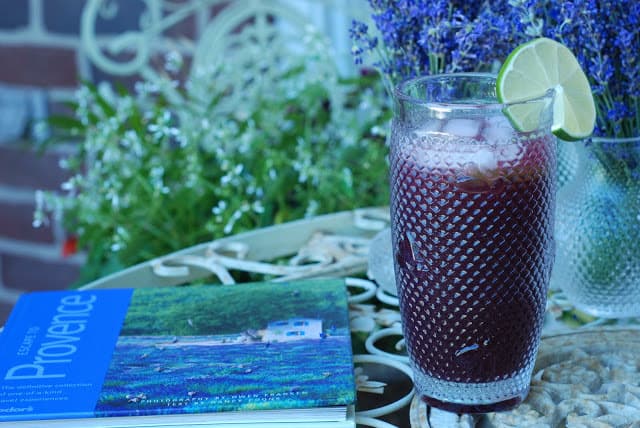 I’m still hooked on lavender.  I went into my garden and the bees were just buzzing all over my lavender.  They became extremely annoyed as I snipped my lavender and inhaled the fabulous fragrance.  I had to remind them that it was my garden and my lavender and they were merely guests.  Yet I appreciated the work they were doing.  Somewhere there is a beehive filled with lavender honey…my lavender honey.  I wonder where it is?
I found this recipe about 100 years ago (seems like it) in some kind of country home magazine.  I have kept it for special ocassions.  You know “chick functions” where they would appreciate drinking flowers. 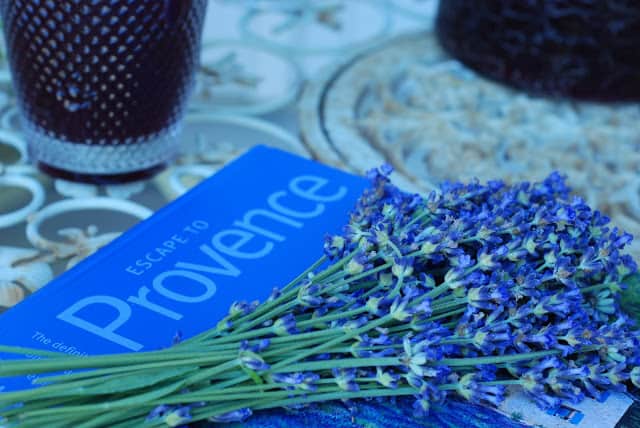 As I sat snipping my lavender I had a sudden craving for southern France.  I had the most delicious Lavender Creme Brûlée there a few years ago.  Since I don’t need to wear that Creme Brulee this summer, I decided to “escape to Provence” by making this Lavender Punch. 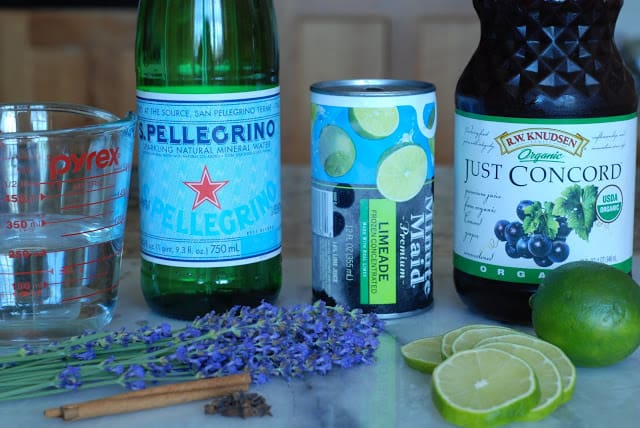 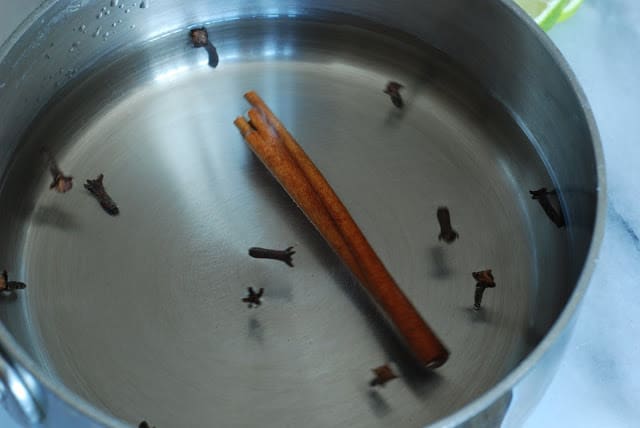 In a small saucepan, heat water.  Add the cinnamon stick and cloves. 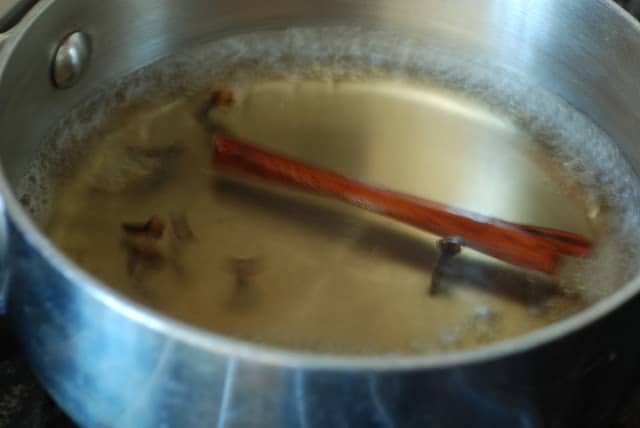 Bring to a boil and let simmer for 5 minutes.  Terrible picture.  Sorry I have nothing better to choose from, but you get the idea.  Right? 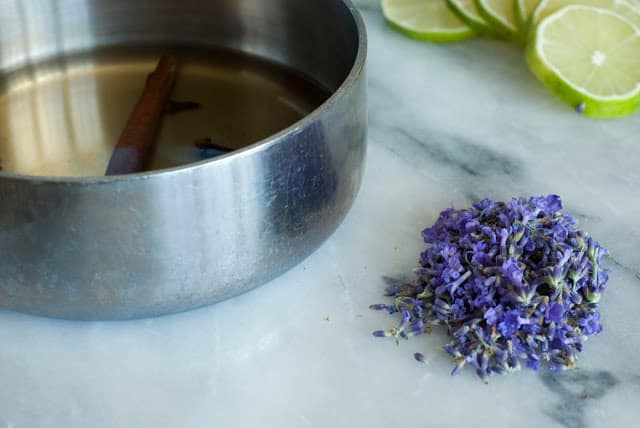 Remove from the heat and add the lavender blossoms. 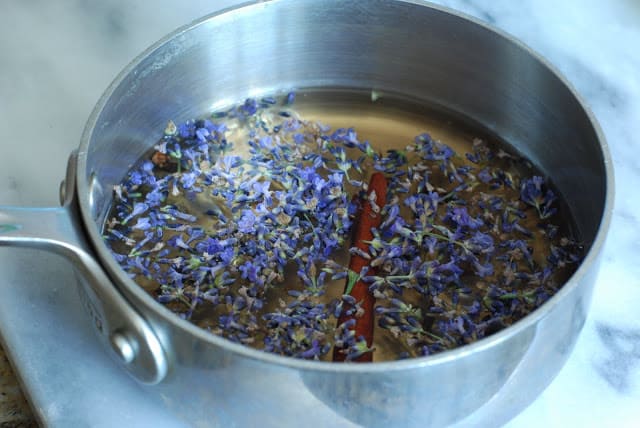 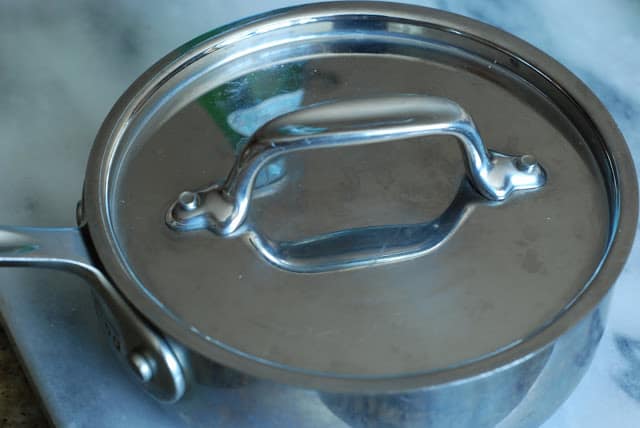 Put a lid on the pan and let the mixture steep for 10 minutes. 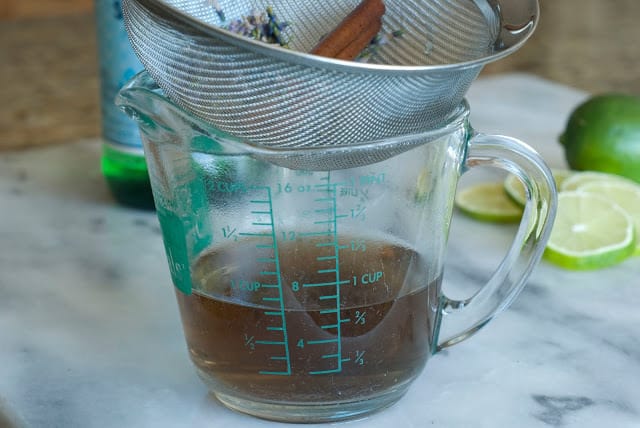 I am now calling this a brew.  Strain the brew into a bowl or measuring cup. 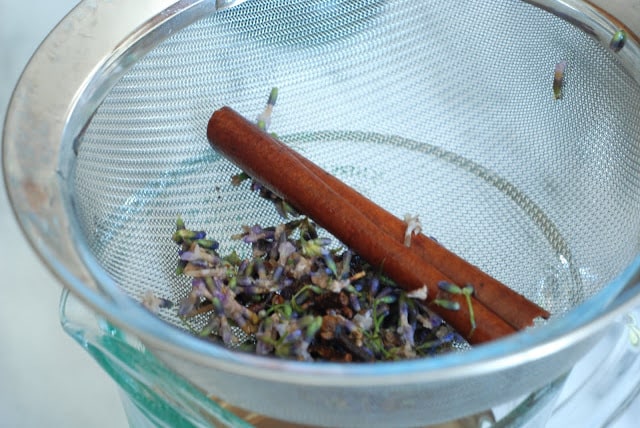 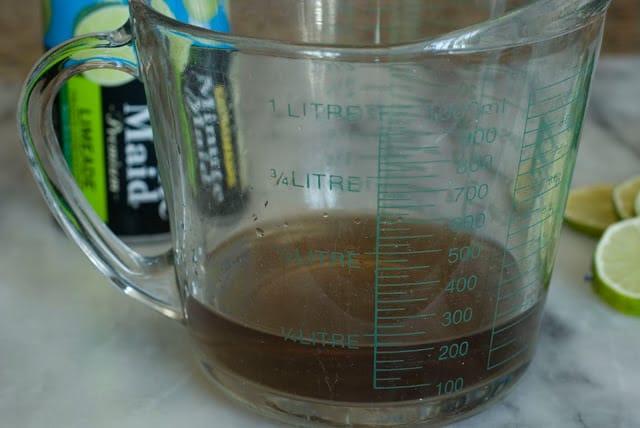 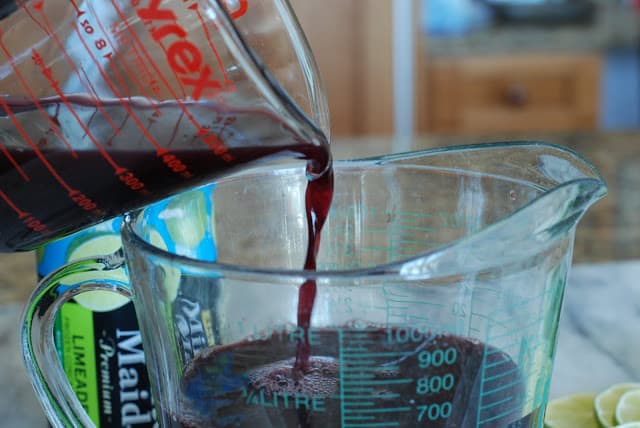 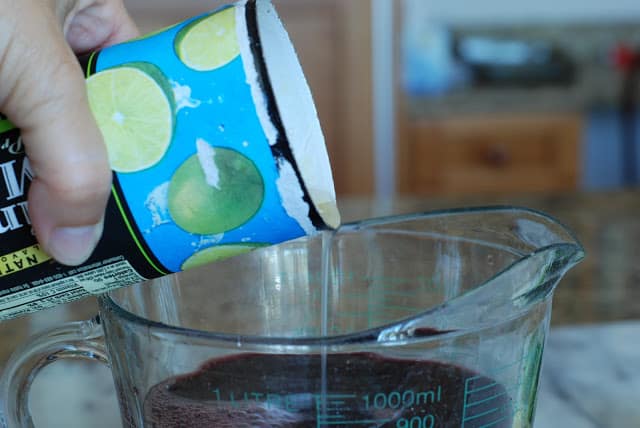 Now add 6 ounces of frozen lime juice concentrate.  I accidentally bought a 12-ounce can.  What was I thinking???  So I thawed it and poured in half to my brew.
Add this point you need to cover and chill the mixture.  You can make this much a few days in advance. 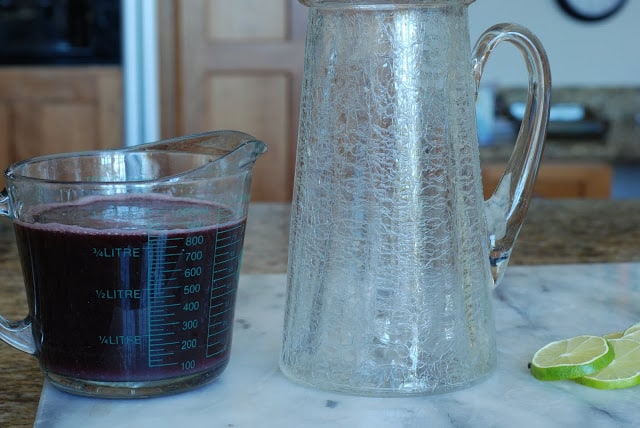 Now get out your pretty pitcher.  No I never use this pitcher.  Only when blogging.  It belonged to my Great Grandmother and I would just die if I broke it.  So, why in the heck did I even take it out of the china cupboard? 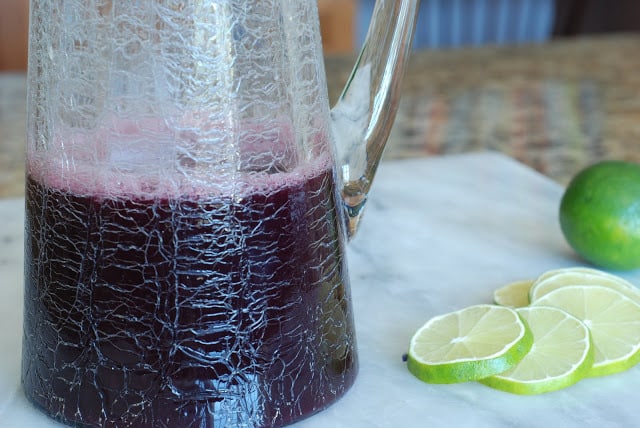 Pour the grape juice/brew into a picture or punch bowl or whatever. 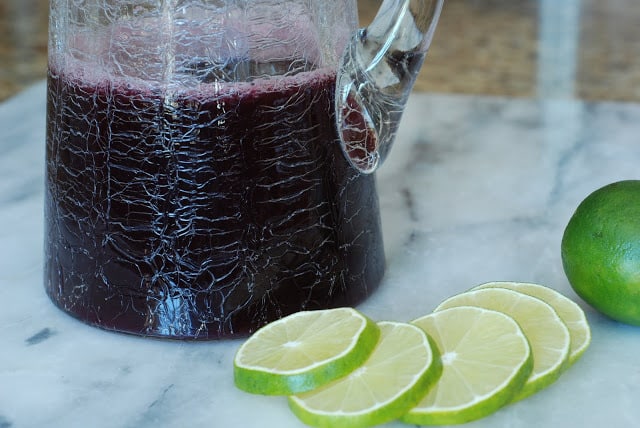 Add the slices of one lime. 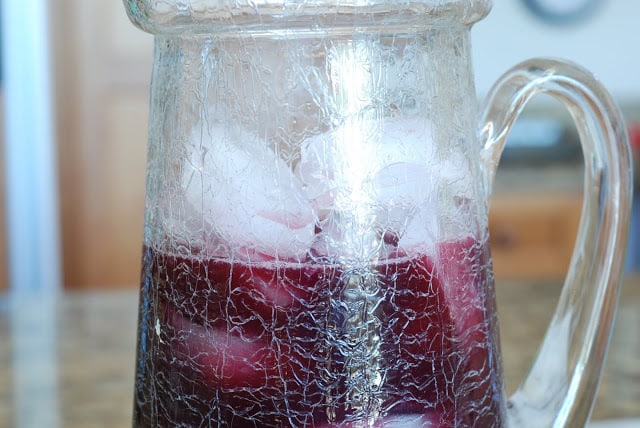 Fill the pitcher with ice cubes. 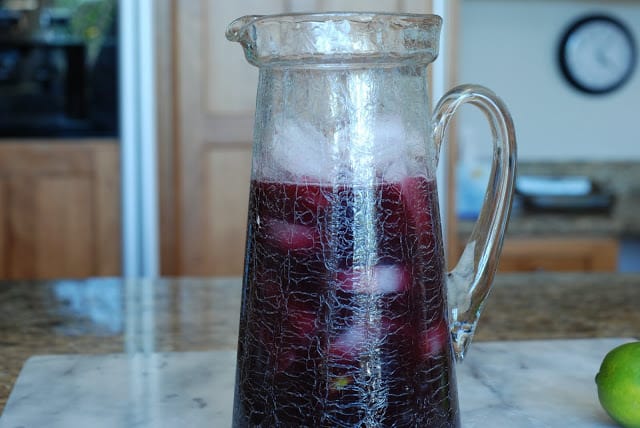 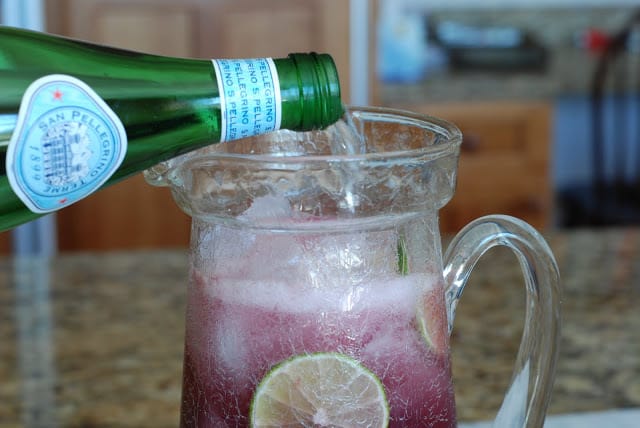 Fill the pitcher with sparkling water or gingerale and stir very well.  The grape brew will want to settle to the bottom of the pitcher. 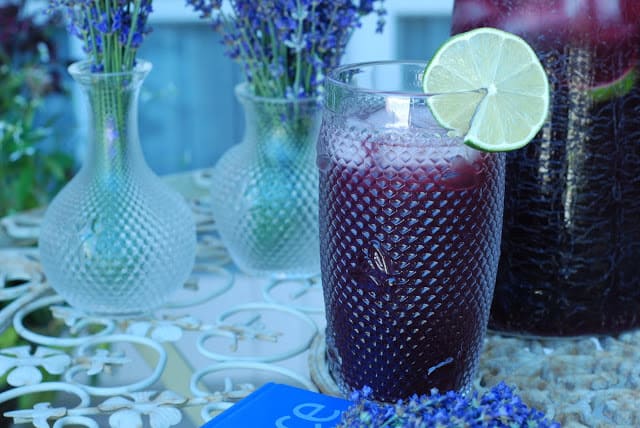 Now take a cold glass of lavender punch to the garden and watch the bees buzz around your flowers.
They have to be jealous. 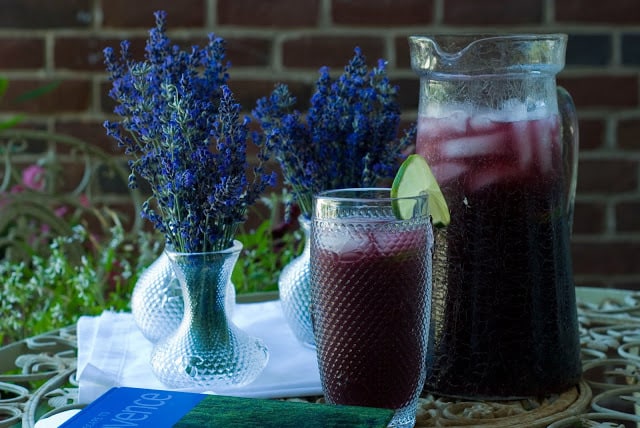 Ahhh.  My escape to Provence. 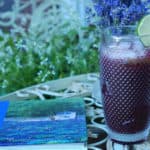 Spiced Grape, Limeade, and ginger-ale with a hint of lavender