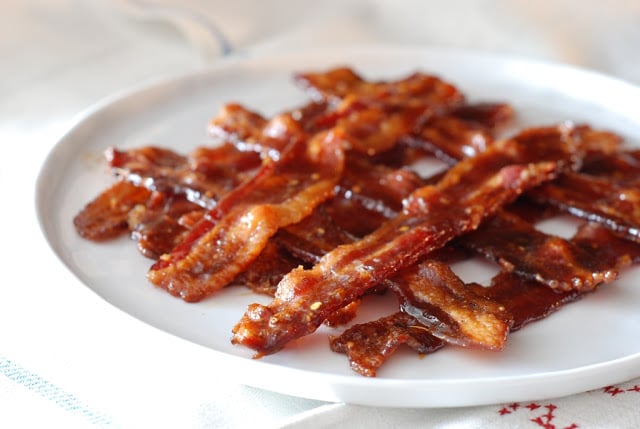 I can’t believe I posted a recipe that I have never tried before.  99% of the time all recipes that I post are tried and true recipes that I make often at home.  This post is an exception. 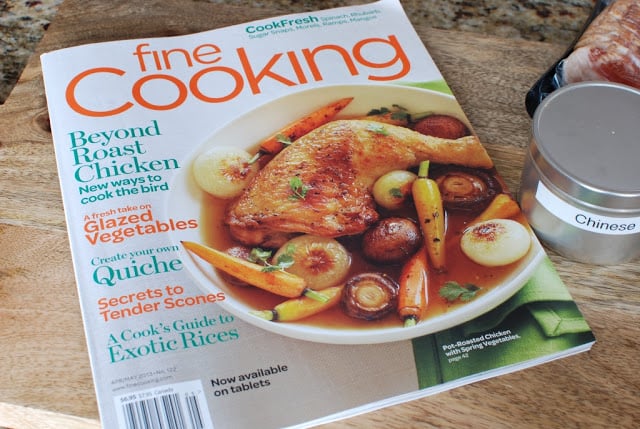 Before I go on I have to say if you are looking for a cooking magazine, this is the one.  I have subscribed to Fine Cooking for years.  I think it was a gift from my husband.  The magazine started coming to my home in June of 1994 it was their third magazine.  This magazine is numbered 122.  If only I can get my hands on the first and second magazines, I would have them all.

I’ll continue.  I was browsing quickly through the beautiful pictures and recipes when this particular one caught my eye. 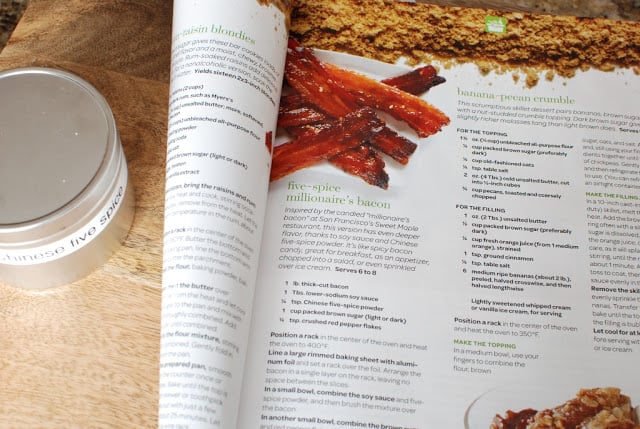 I have to admit that I’m not a bacon fan.  I think there are only two of us in the world.

I scanned down the ingredient list and the only thing on the list that I really didn’t love was the bacon.  Everything else was very appealing to me.

I really had to make this recipe and didn’t have an excuse to cook up a pound of bacon for me and the husband that rarely reads this blog.  The solution was to post the recipe.  So here we go.  This is the very first time I have made this recipe.  We are experimenting together.

I think it will be fun. 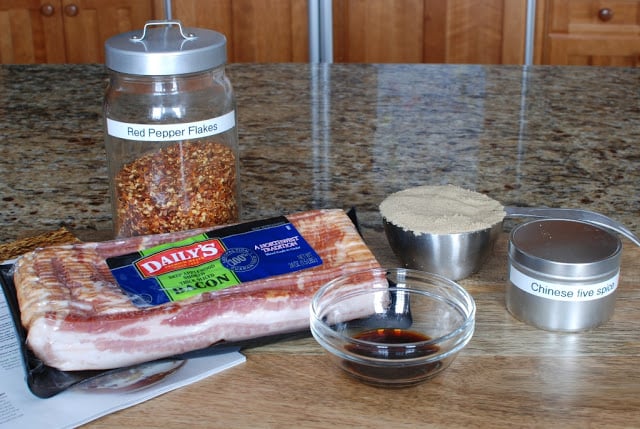 Position the rack of your oven in the middle and preheat the oven to 400 degrees F. 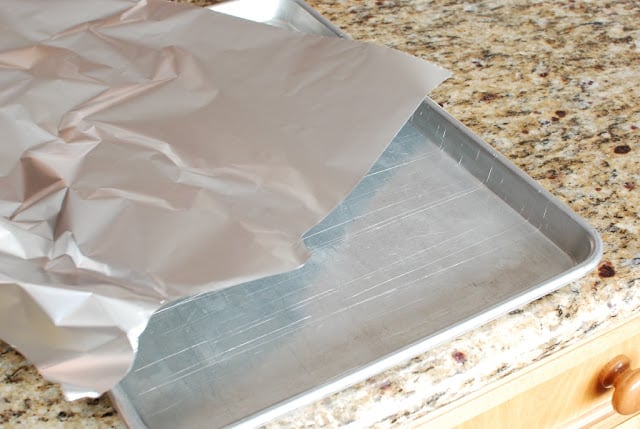 I am lining my baking sheet with heavy duty aluminum foil.  I have made brown sugar glazed bacon before and I know that it can be a heck of a mess and you have to chisel the baked on brown sugar off. 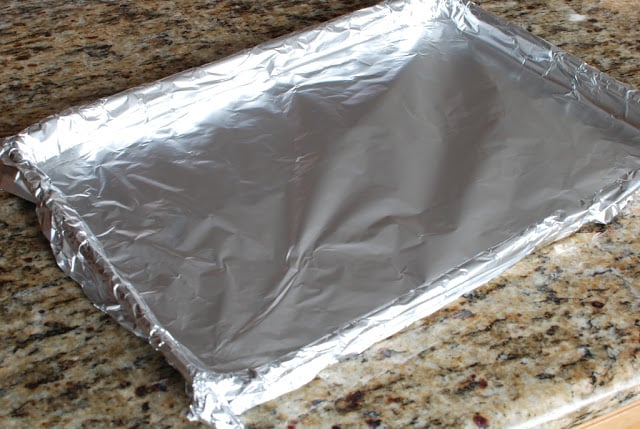 I am taking a second step/precaution.  I love this product.  If you it’s available to you, buy it!  This is aluminum foil that has a non-stick surface on one side. 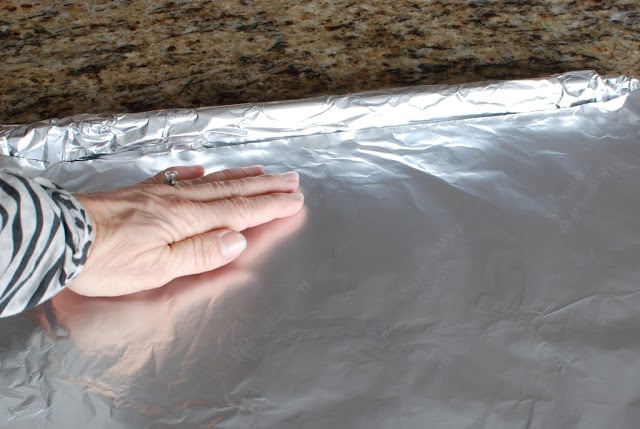 Place a layer of the non-stick on top of the heavy duty aluminum foil.

I know you are asking why didn’t I just line the entire pan with the non-stick?

Because it isn’t wide enough to cover the entire pan with one sheet.  I don’t want any oil or brown sugar leaking anywhere.

I have my reasons.

Insert:  Whoops, after reviewing the recipe I forgot to put a rack in the baking sheet and place the bacon on top of the rack.  I’m sorry.  Ugh…idiot. A rack would have been very helpful.   I would suggest you do that, if you want.  Or you could just follow me…I know what I’m doing???? 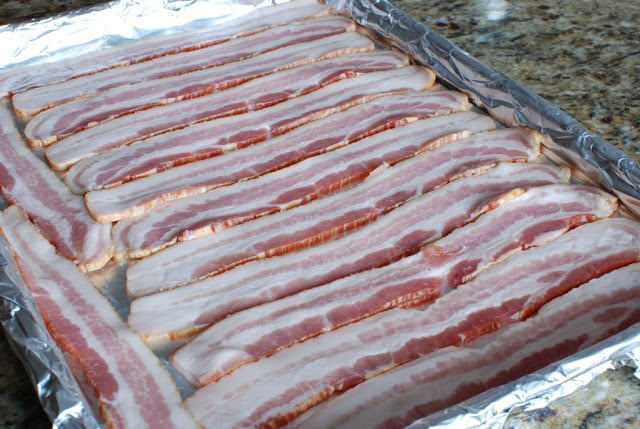 Lay the bacon on the foil side by side.  I didn’t realize that you can really squeeze them in.  Just make sure you squeeze the entire pound of bacon on the sheet.  They will all fit. 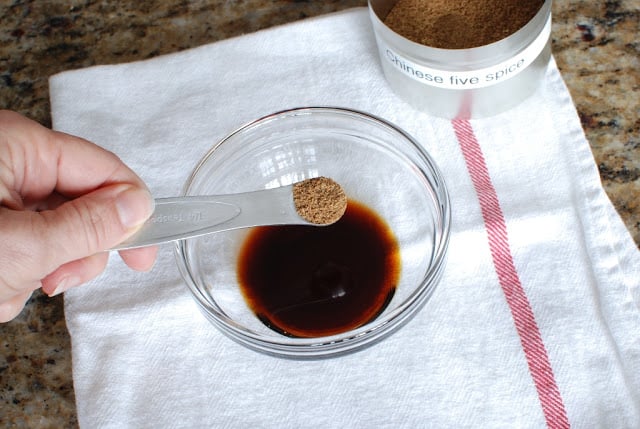 Mix 1/4 teaspoon of the Chinese five-spice with the soy sauce. 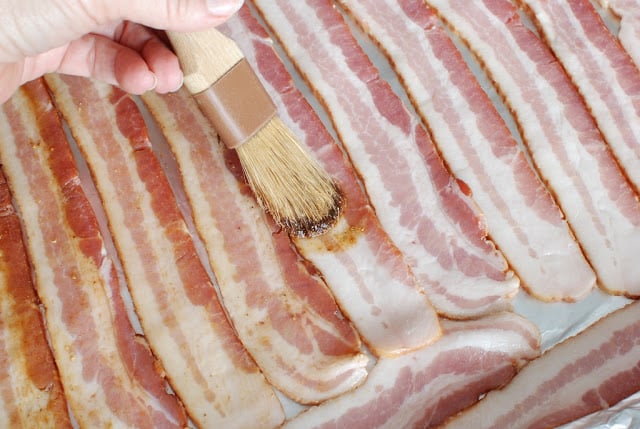 Brush the entire amount over the bacon strips. 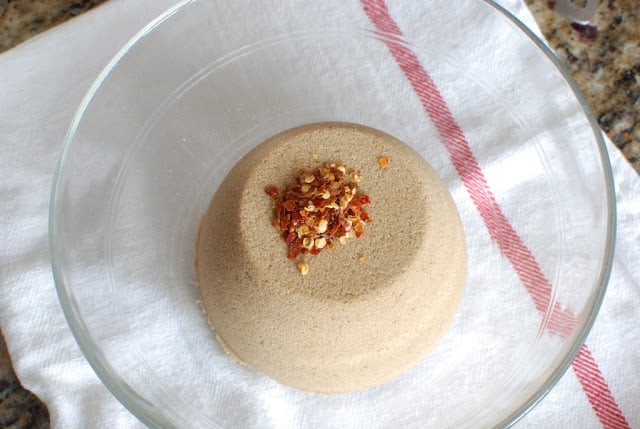 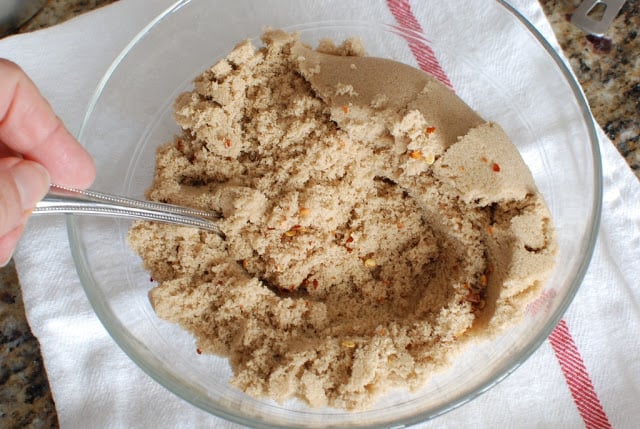 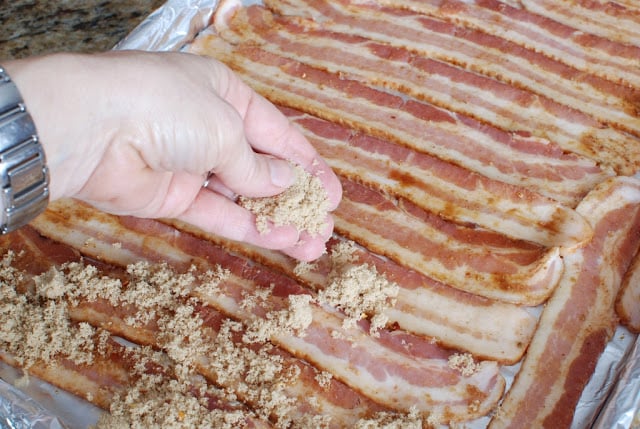 Sprinkle the entire mixture over the slices of bacon. 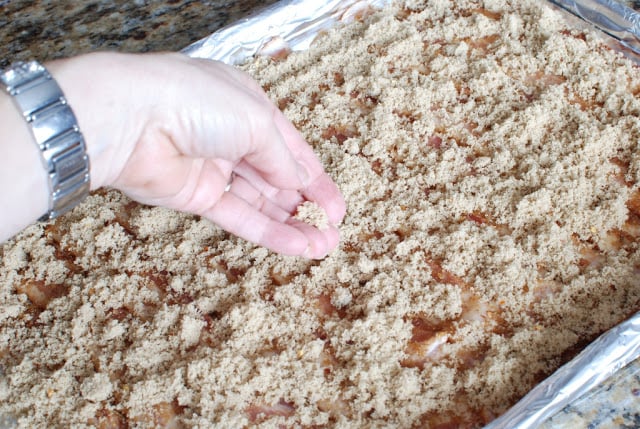 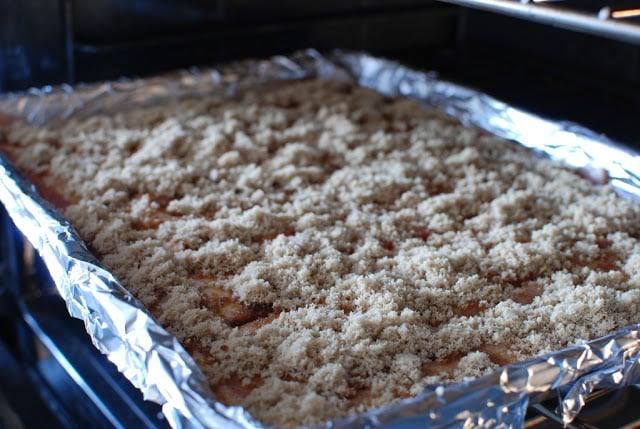 Place the baking sheet in the preheated oven.  Bake for 15 minutes. 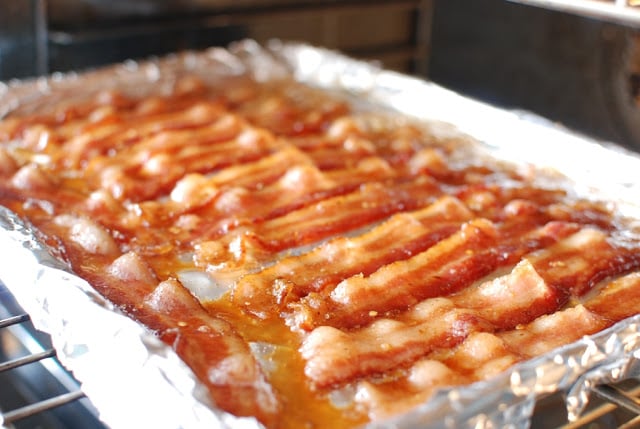 After 15 minutes rotate the pan. 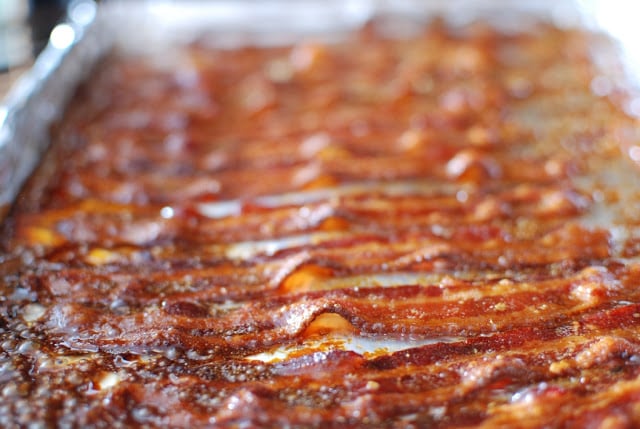 Continue to bake for another 15-20 minutes or until the bacon looks crisp.  Don’t over cook of the brown sugar will burn. 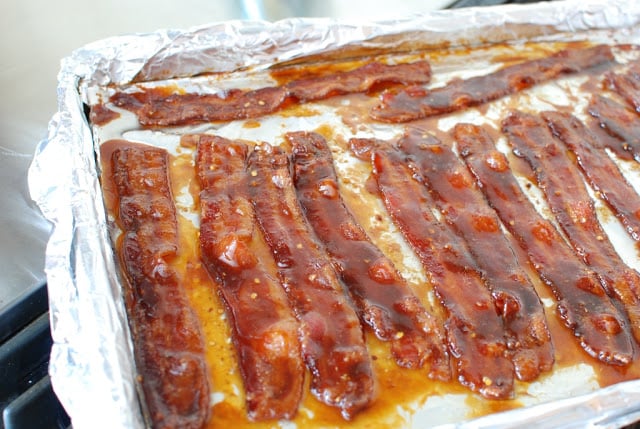 Remove from the oven and let cool.

DO NOT let the bacon cool too long or it will be very difficult to remove even with the non-stick foil.

If the bacon sticks, just reheat the bottom of the pan and the bacon will release as soon as the sugar heats up. 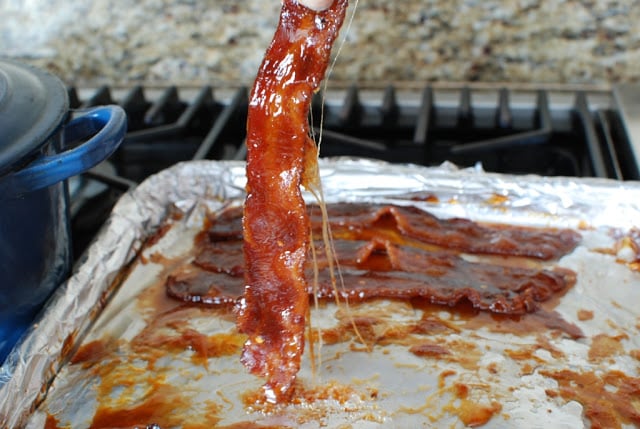 Be very careful because that sugar is HOT.

Just look at the gooey brown sugar glaze.  I’m pretty sure I’m going to love this.

The Chinese five-spice is very subtle, but noticeable.   I would call it bacon flavored candy.
AMAZING!!
Janet’s Tips:

Recipe directly from Fine Cooking Magazine: Another tip:  I think I would spray the rack with a non-stick spray or you might have to chisel them bacon off the rack.

END_OF_DOCUMENT_TOKEN_TO_BE_REPLACED

They are back! I anxiously await hatch green chili

Crispy on the outside, soft and tender on the insi

I have always been afraid of making sorbet because

This is one BEETiful PEACHy wrap. Beets and peach

Happy Father’s Day to all you great dads out the

Happy Spring🌷 Here are some of my favorite Spri

Fluffy white chocolate icing is a silky smooth, me