One of the reasons I started this blog was to catalog family favorite recipes.  I can’t believe it has taken me so many years to post this beloved recipe of my grandma’s apple dumplings.  My grandparents had an apple orchard in Lindon, Utah.  Grandma had one particular tree that she loved for making apple dumplings.  I remember one year her tree didn’t produce too many apples.  She told us not to pick any of the apples from that tree because they were for Ira’s (my dad) apple dumplings.

Probably one of the fondest memories I have of my grandmother was the smell in her kitchen while she was baking apple dumplings.  The cinnamon and apple combination is heaven.  Wouldn’t you agree?

This is my dad’s favorite dessert.  He used to always say, “I like two kinds of pie…hot and cold apple”.  I’m pretty sure he puts his mother’s apple dumplings in that category.  When I told him I was making apple dumplings, he was as giddy as a little boy.  I need to make apple dumplings for him more often. 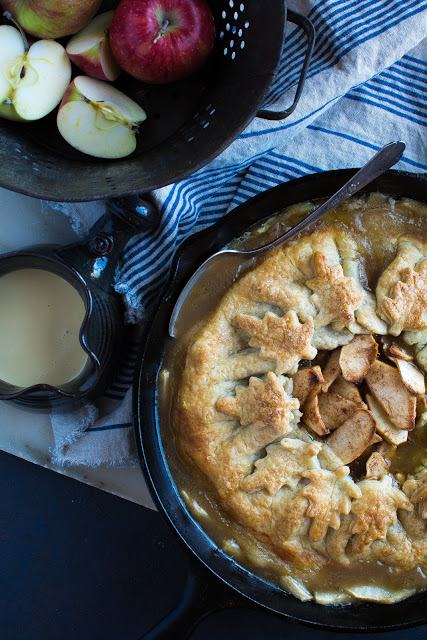 As you can see in this photo, my grandma didn’t make individual dumplings.  She gathered dough around a pile of sweetened apples.  She generally placed two large dumplings in a 9 x 13-inch baking dish.  If you are saying that these aren’t apple dumplings, to my family they are.  They are really easy to make.  You’ll love them.

Grandma topped her apple dumplings with a scoop of vanilla ice cream, which is the perfect way to eat them.  I made an apple cider creme Anglaise just to switch it up a bit and because it’s so fabulous to serve cold over hot dumplings or crisps. 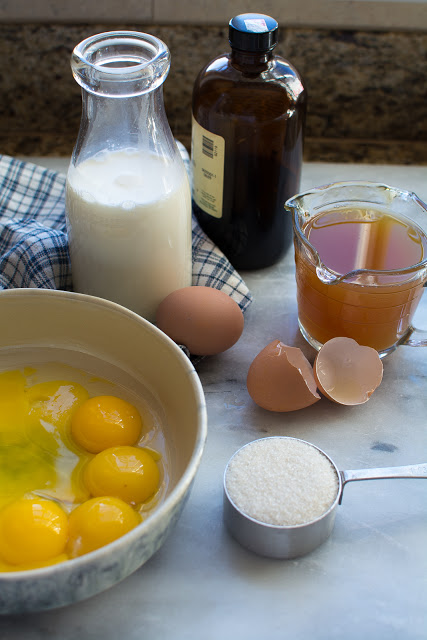 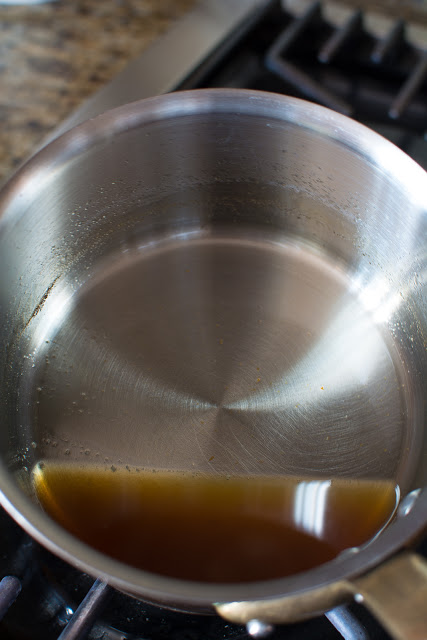 Pour 1 cup apple cider into a small saucepan and simmer until juice is reduced to 1/4 cup.  Set aside while making the custard. 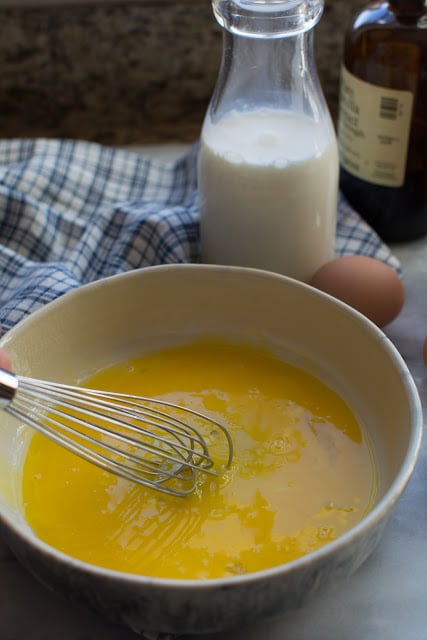 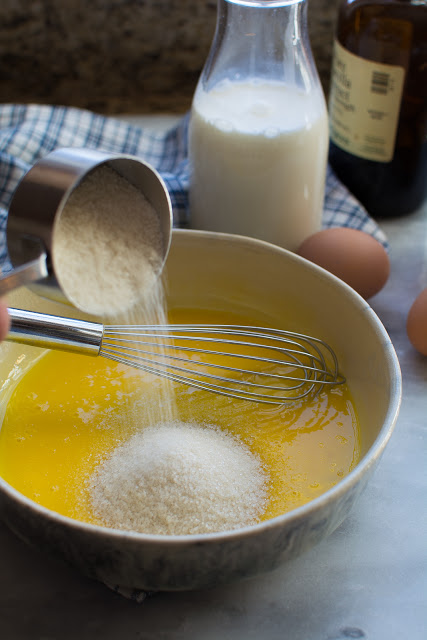 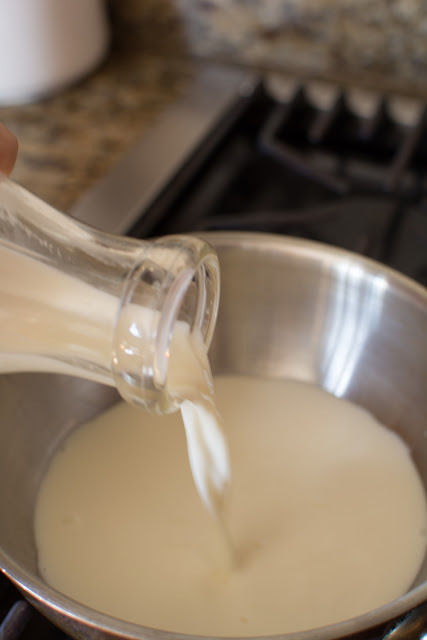 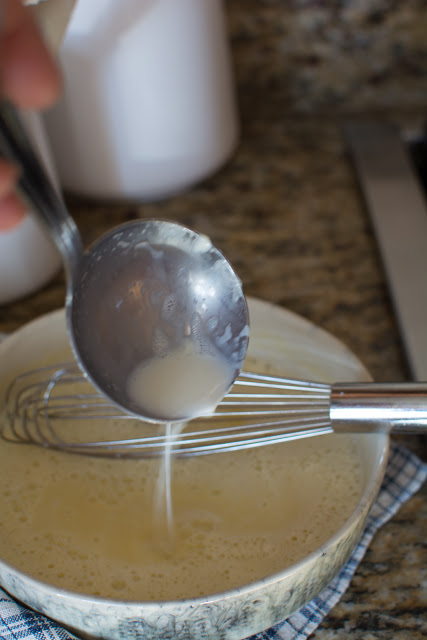 Once milk begins to steam slowly add it to the egg/sugar mixture one ladle at a time until 3/4 of the milk has been added to the egg mixture.  Pour mixture back into the saucepan and cook over low heat do not boil. 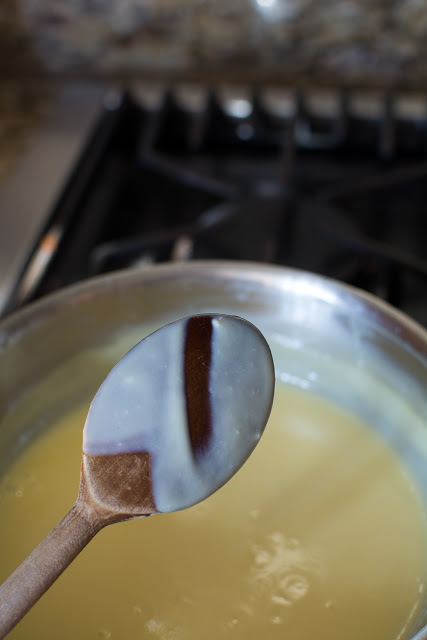 Cook until mixture coats a spoon.

Strain mixture into a bowl.  Straining is always a good idea just in case some of the egg has cooked. This will make sure the custard is smooth and creamy without any lumps. 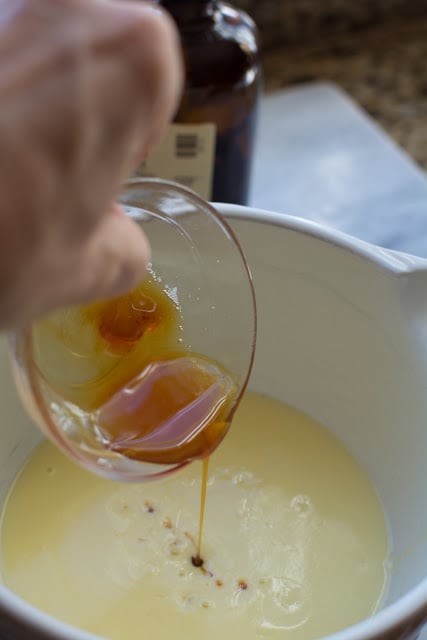 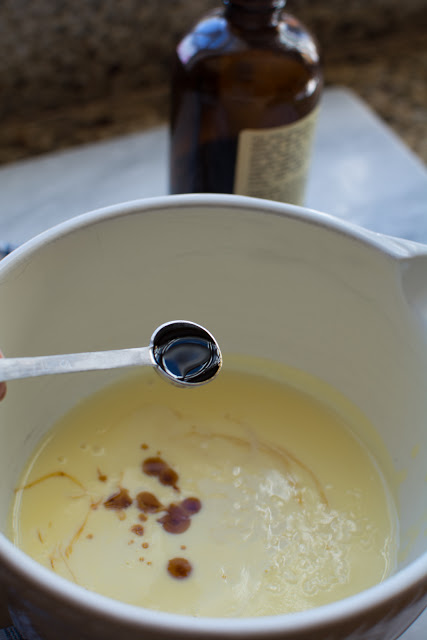 And 1/2 teaspoon vanilla. Cover and refrigerate until ready to use.  This can be made a day in advance and kept in the refrigerator. 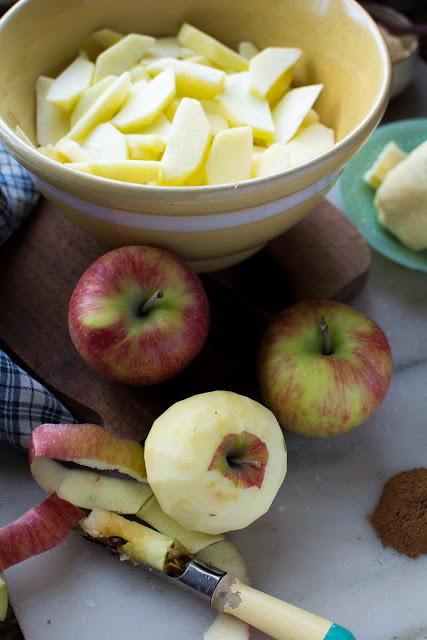 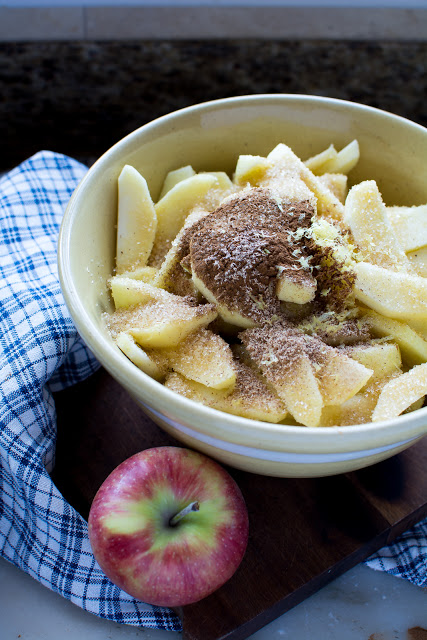 Place apples in a large bowl and toss with 1/2 cup sugar, 1 tablespoon cinnamon, 1/2 teaspoon nutmeg, juice from 1/2 lemon, zest from one lemon.  Set aside. 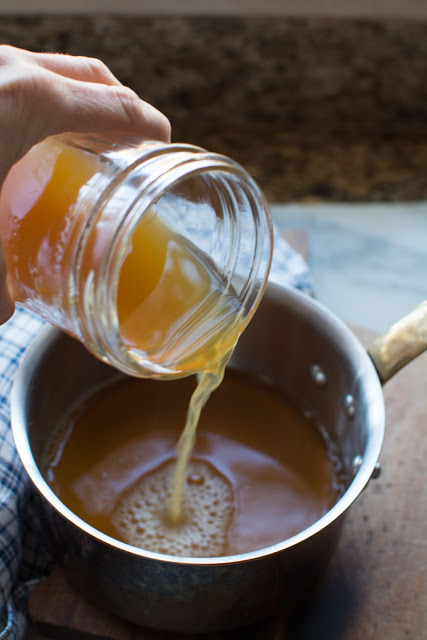 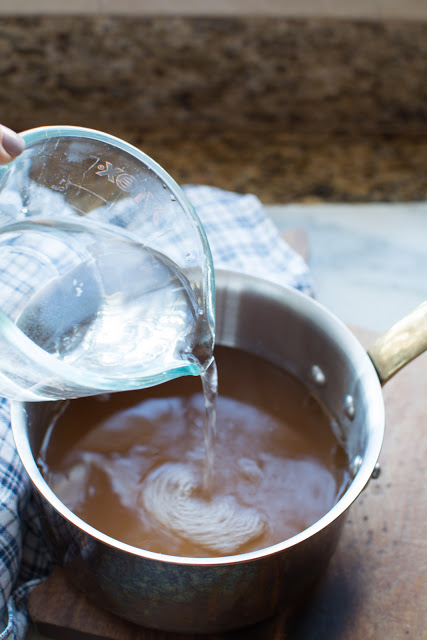 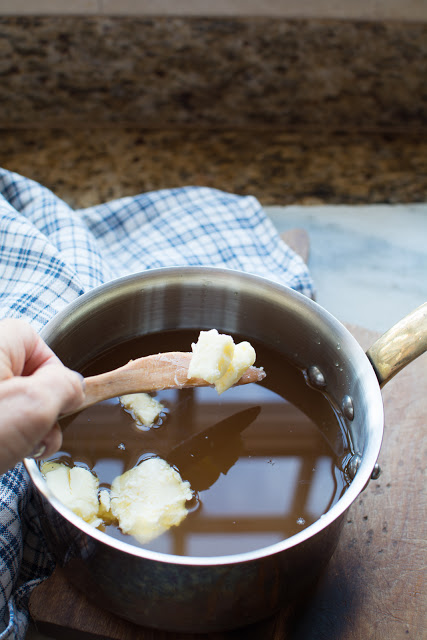 and 2 tablespoons of the butter.  Heat until mixture simmers gently and butter melts. 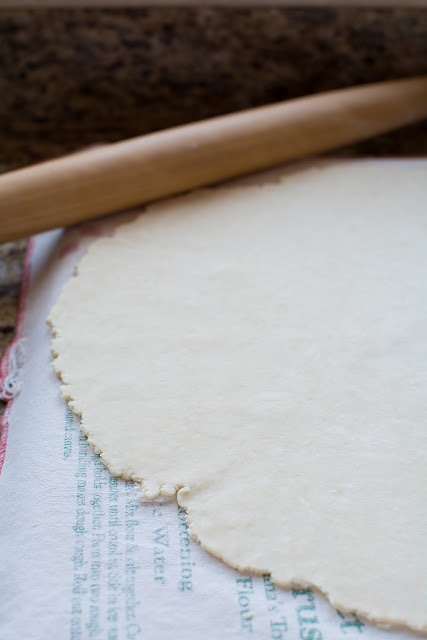 Roll out chilled pie dough into a large 18-inch circle. 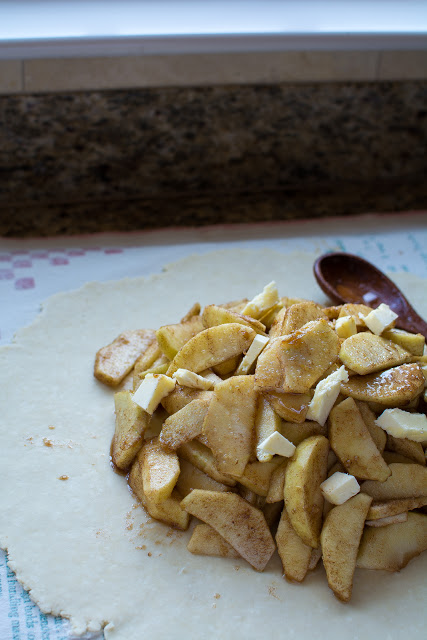 Mound 8-9 cups apple mixture into the center and dot with remaining 2 tablespoons butter. 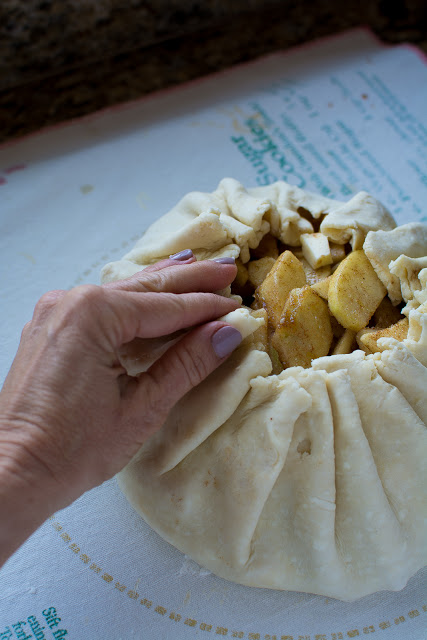 Gather and pleat pie crust around the apples. 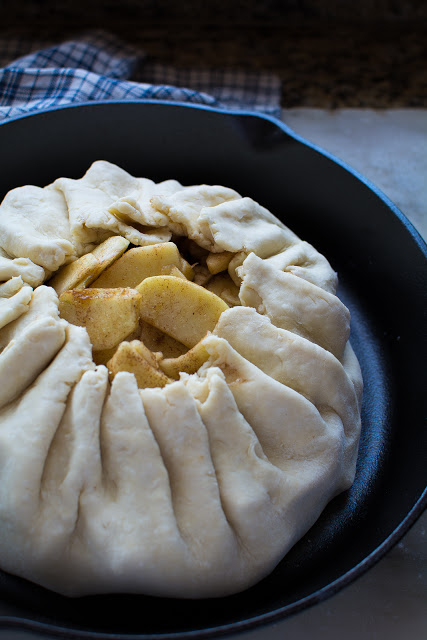 Lift and gently place the large dumpling in a baking dish or a 12-inch cast iron skillet. 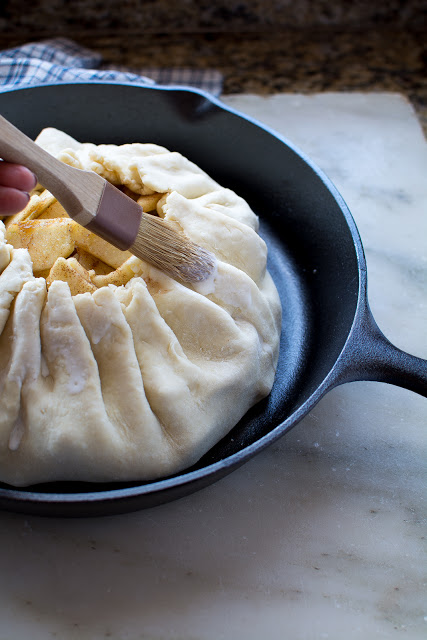 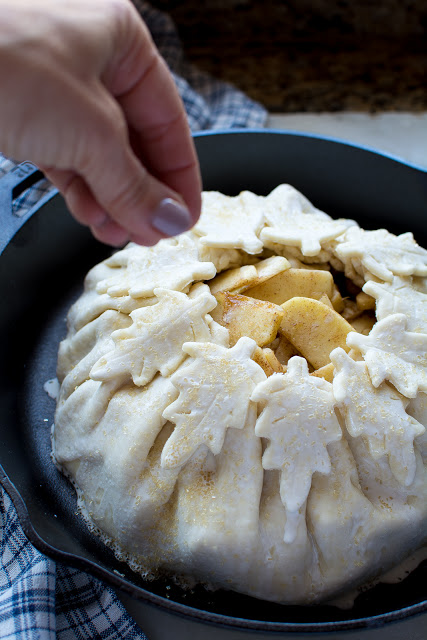 Sprinkle with a bit of course sugar.

I decided to cut out some of the pie crust into leaf shapes.  I think the look more like Christmas trees.
Ha!  I purchased copper leaf shaped cookie cutters from Martha Stewart in the day.  They come in handy every now and then. 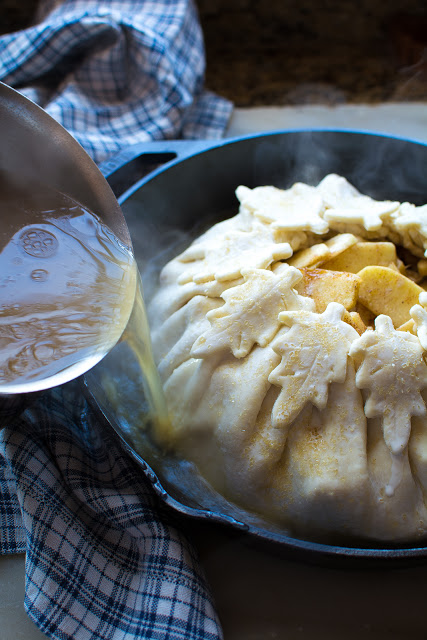 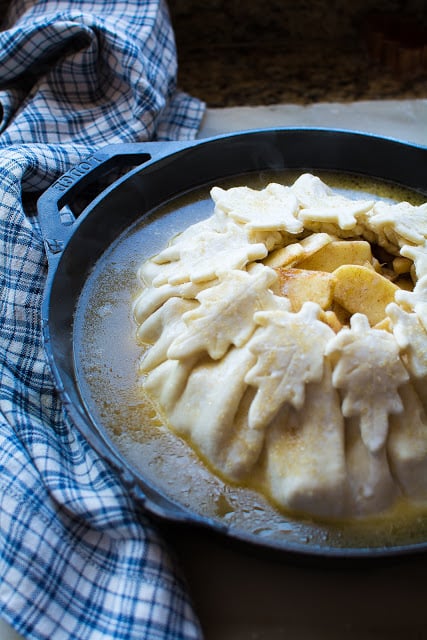 Add remaining apples around the outside of the dumpling.

Note:  Dough may be divided into two rounds and made into two dumplings.  Arrange in a 9 x 13-inch baking dish.

This sauce is my dad’s favorite part.  He calls it “the dip”.

Bake the large apple dumpling in a 350F degree oven for about 60-65 minutes or until golden brown. 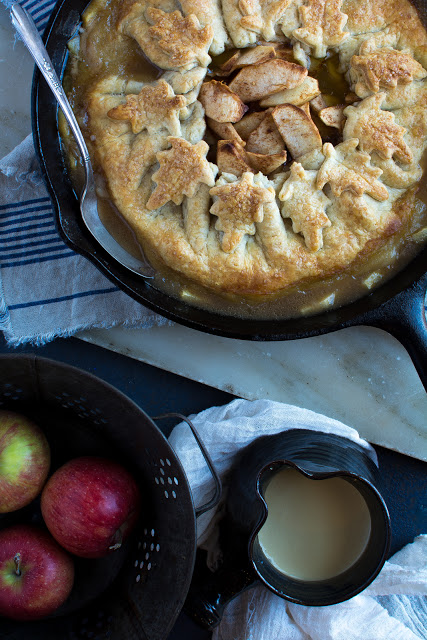 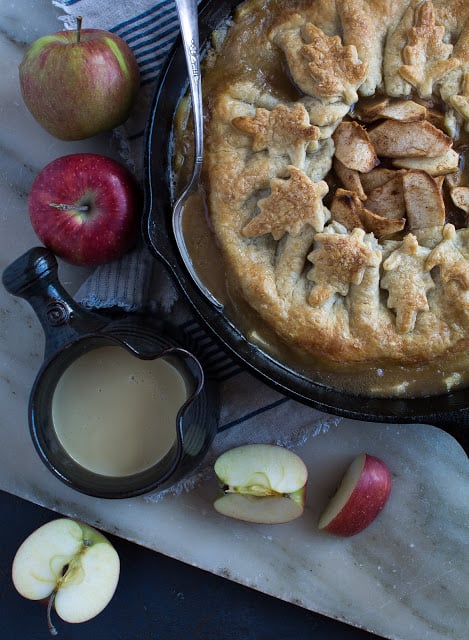 The taste of autumn. 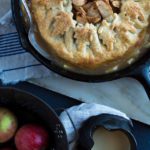 Apple dumpling is a rustic cousin to apple pie. Much easier to create a finished dish when you aren't worried about perfect edges.

To make the Creme Anglaise:

To make the dumpling: